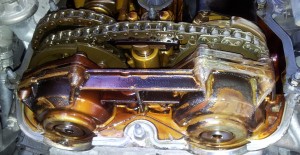 With the valve cover removed on a BMW, you can see the timing chains that are driving the camshafts.

When the four-stroke internal combustion engine (ICE) was in its infancy, the need to control engine valve timing was just as paramount as it is today.

The earliest Otto or Lenoir engines of the 1860s used levers and rods to keep valves phased to the crankshaft’s position. These days, at least one camshaft is responsible for opening and closing the intake and exhaust valves. (Let’s just say that, in this regard, a Mazda rotary engine doesn’t count!)

The original rods and linkages gave way to timing gears, timing chains, and timing belts… and now a new technology is being used. Timing belts immersed in oil.

Engineers know that the more rigidly the camshaft(s) is kept synchronised with the crankshaft, the more efficiently the engine will perform, the more power it will generate, and the fewer emissions it will create.

The modern engine has control over every aspect of its operation, but the situation remains the same today as it did back in the 1860s: there has to be some form of direct link from the crankshaft to camshaft(s) for proper valve train operation. 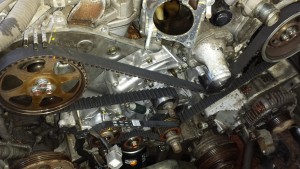 The use of timing gears was very popular for many years on early four- and six-cylinder engines. Nylon gear coatings were employed to combat noise issues.

It’s still commonly used in heavy duty and industrial applications due to its brute strength and longevity, but it’s a heavy system and noisy – traits that make it ill-suited to the modern quiet fuel-efficient automotive engine.

A timing chain allows the camshaft to be located father from the crankshaft, and it easily permits multiple camshaft engine designs. 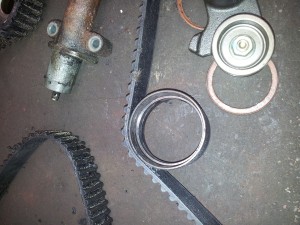 The result of a seized idler pulley on a Honda V6. The belt is actually melted to the pulley. The result was lots of bent valves and a destroyed engine.

The timing chain system works especially well with overhead valve/pushrod engines and is used extensively on many overhead camshaft engines designs. But like the timing gear it has had its drawbacks. Comparable to the timing gear system, it needs to be mounted inside the engine to allow for proper lubrication, using the engine’s oiling system.

And noise is still an issue. Nylon coated camshaft gears developed in the early 1960s solved some of the noise issues, but created other concerns. The nylon tended to fall off the pulleys when they accumulated mileage, were overheated, or poorly serviced. The early timing chain system was heavy (with cast iron gears), so components started to be made from aluminum and powdered metal to save weight.

The fact that timing chains stretch is still a drawback. Yes, tensioners and guides break but all manufacturers are aware that chains will stretch over time and they take this into consideration when engineering their systems.

Soot particles left over from combustion in the oil are a particular concern, as they can easily destroy a timing chain. Manufacturer-recommended oils and maintenance schedules are imperative to the long service life of a timing chain system. 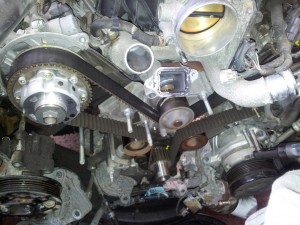 The width of this Toyota timing belt consumes power and uses up engine compartment room.

Using a rubber timing belt to drive the camshaft and keep everything in the proper phase may seem like newer technology, but it was actually developed in the mid 1940s and was used in a production automobile in the early 1960s.

Numerous design changes have been made since then. Today’s timing belts aren’t just a toothed rubber belt. Rubber doesn’t stand up well to heat and oil, so they’re made of a concoction of materials, relying heavily on nitrile rubber, or hydrogenated nitrile butadiene rubber (HNBR). The use of HNBR makes the timing belt resistant to common contamination issues, like engine oil and coolant.

Because the belt is made of a rubber compound, it’s quieter than the traditional timing chain when in operation and was made even quieter when manufacturers went to a round-tooth design. That also increased belts life expectancy. 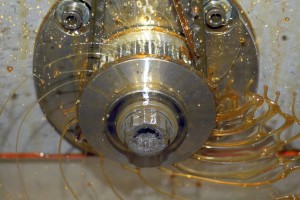 A timing belt running in oil on a test rig. Photo courtesy of Continental ContiTech.

Unlike the timing chain, a timing belt won’t stretch. It will wear, yes, but the use of products such as fiberglass, Kevlar, and other exotic fibers prevent it from stretching. This is a huge advantage in keeping the engine in proper time or phase. Great care must be taken during replacement, however, because some of these elements can be broken if the belt is forced over pulleys.

The timing belt has seen widespread use, but its need for strict replacement intervals led many manufacturers to return to timing chains. And now emission concerns are forcing manufacturers to rethink their position on timing belts once again. The longer service life, reduced friction and noise of the latest designed timing belts has seen more interest lately, especially in Europe. Industry experts predict that fully 70% of all new vehicles in 2017 will use a timing belt.

Manufacturers like Volkswagen, Ford, Dayco, and Continental-ContiTech are heavily involved in the development of this technology… and they’re producing interesting results. They’ve seen dramatic improvements in operating thermal efficiency, as well as improved engine sealing. And belts in oil have been shown to reduce friction by as much as 2.5%. That equates to lower CO2 emissions and better fuel economy.

The entire BIO system is designed to run inside the engine with specially designed low-friction tensioners and guides. They utilize new rubber compounds, containing polyamide, aramid fabric, Duralon, Teflon, and a rubber compound made from ANC-HNBR (hydrogenated acrylonitrile butadiene rubber).

The belt and pulley designs have also been changed to provide exceptionally smooth and quiet operation.

The BIO belt can be made thinner, taking up less room under the hood, and, similar to a timing chain, giving engine designers more flexibility. The aim is to reduce the width from 16-20 mm to as little as 10 mm (current timing chains are about 9 mm).

The BIO system should provide an optimal life span of about 240,000 km, as long as the engine is properly maintained. But the goal is to have this technology last for the life of the vehicle, just like a timing chain.

The concept has been proven on the road. Since 2012, the Ford Fiesta in Europe has offered a 1.0-litre turbocharged in-line three cylinder engine for the EcoBoost family that uses the BIO technology. (For its part, Honda has been using BIO technology for quite some time in applications like lawnmowers and generators that have overhead cam motors.)

So where does all this take us? As always, emission control and fuel economy is paramount for modern carmakers, so the technology that links the camshaft to the crankshaft is not going to sit still.

Formula 1 has had air-operated valve trains for many years and there are numerous designs by many manufacturers that use pneumatic or hydraulic controls to operate the engines valves.

The quest to lower CO2 emissions will be the driving force in much of the technology that we see entering our shops over the next few years. And lowering the reciprocating mass and friction that a camshaft causes has to be something that engineers are looking at.

Automotive technology has a natural progression, as needs change and capabilities increase. The way that the camshaft/camshafts are driven has not been immune to this evolution.

And it’s going to change much more in the future as carmakers continue to demand more for less.