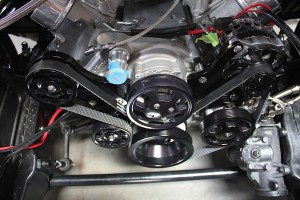 If it feels like you’re doing fewer replacements of belts and hose than you used to, you’re probably right.

Today’s vastly improved compounds and rubber formulations for both have impacted the traditional change intervals.

The newer engines and enclosed engine compartments have created an environment with increased torque demands as well as increased under hood temperatures. Some alternator pulley diameters have also decreased, which adds to the overall demand of the poly rib belt for flexing.

As a result, most OE automotive coolant hoses and belts are now made of EPDM, which stands up much better to the high heat and harsh environment in which these components operate.

EPDM doesn’t exhibit the same signs as other types of rubber when they’re close to failing. They do not crack as Neoprene belts did in the past. Instead, today’s belts lose rib material, similar to that of a tire tread. This makes it difficult to just open the hood of a vehicle and complete a visual inspection. Over time a belt that started out with a V profile starts to look more like a U. As it wears, it will have less surface area contact with the pulley and begin to fail or make noise.

It’s important for technicians to show vehicle owners what a worn belt looks like and educate them so they understand that a belt with worn grooves won’t be able to maintain friction with the engine’s pulleys.

While EPDM and other material changes allow belts and hoses to last twice as long as they normally did in most applications, the time and labor involved in the job have generally increased. 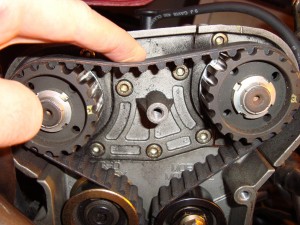 Ten years ago, hose replacement was a matter of loosening a few clamps, and removing the hose. Today we’re seeing many more assemblies and quick-connect fittings, not to mention tight engine compartments which sometimes means complex removal procedures.

As for belts, the intervals have increased to as high as 160,000 km. Some vehicle manufacturers only offer inspection intervals. In either case, belt wear tools are available which indicate when a belt has reached its replacement period.

In Canada, component manufacturers generally suggest a serpentine belt and hose inspection at 100,000 km and replacement at 150,000, at which time other related components should also be checked.

It’s particularly important to check the system’s idlers, tensioners, and pulleys. They may have held up fine until now, but can they be expected to last another 160,000 km? And if they don’t, the resulting failure could do a lot of damage and increase the cost and difficulty of the next replacement.

If the parts are accessible now, and replacement of all related hardware could avoid a costly and inconvenient breakdown, the customer would probably approve the work.

When replacing radiator hoses, always do so in pairs (upper and lower). This may be most conveniently accomplished during other repair occasions, such as during radiator or water pump replacements. Check the hoses for any leaking, cracks, bulging, or other signs of wear.

Always use radiator hoses that are resistant to electro chemical degradation (ECD). And with branched radiator hose assemblies, always replace the entire assembly, not just the hose segment.

Plastic components (such as Quick-Connect couplings and tee connectors) weaken with heat and time. They do a great job when they’re first installed on a vehicle, but they are sealed with a single O-ring in most cases and are leak prone if removed and then reinstalled. By showing a vehicle owner what the O-ring looks like after one of these hoses has been removed, the technician can help them understand why it’s so important to install a new hose rather than trying to reuse the old one.

The bottom line is that belts, hose and related parts are still reliable profit centers for automotive service operations if technicians are inspecting the components properly.

Studies have shown that nearly 20 percent of all vehicles on the road in North America have a serpentine belt that needs to be replaced. Those belts are among the most-overlooked maintenance items on vehicles today. So there’s still room for increased sales opportunities for service centers.

Another reason to pay close attention to belt-driven systems is the problem of belt drive noise. Often the belt is blamed for the cause of the noise, but this is not typically the case.

Because of the demands on today’s serpentine belts, the belt ribs have to be designed to balance the rib surface’s coefficient of friction to ensure the belt is aggressive enough to pull the required accessory torque load, yet low enough to allow “quiet” slip during shift slip conditions and/or slight pulley misalignments.

In most cases, the belt will perform as expected with no noise generation, but if belt noise is experienced, the most common causes are: pulley misalignment, low belt tension, accessory malfunction or bearing failures, and fluid contamination. All of these possible causes should be evaluated and corrected prior to installing a new belt onto the drive system.

If installing a belt onto a locked center drive application (that is, one with no automatic tensioner), the belt should be installed at 35 pounds per rib span tension, then after about three minutes of run-in time, the belt be re-tensioned to 30 pounds per rib. This will ensure the belt is seated correctly in all pulleys, and will provide the sufficient cord stretch to maintain the proper tension throughout the life of the belt and thus avoid any noise due to belt slip.

Timing belt replacement jobs can be very complex and time consuming. If any of the related components such as the tensioners, pulleys or water pumps fail, there can be significant engine damage. This, of course, often leads to much more expensive repairs.

Customers need to understand the complexity of the job and that, in most cases, the labor component is more expensive than the parts. Since we already have ‘hands on’ the components that need to be replaced, it’s much more cost-effective to replace them all at once.

With all the changes brought by engine technology and product development, belt and hose jobs have changed a bit, but they are still a key part of vehicle maintenance.

They remain an important service you can offer to your customer. And with proper inspection, tools, and parts, they’re an important part of your shop’s profitability.