Getting out of the rain 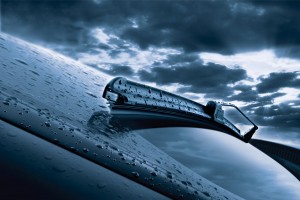 Another piece of the puzzle is falling into place for the companies working feverishly to develop reliable and truly safe self-driving vehicles… and I’d bet this particular technological milestone went unnoticed by most technicians.

Imagine you’re driving along a road when a passing truck hits a huge puddle and splashes your windshield, leaving you momentarily blinded. You instinctively reach for the wiper switch but there’s an uncomfortable second or two before the windshield is clear once again.

It’s this dangerous situation that many manufacturers have been trying to solve. They’d like to take control of the wiper system away from the driver. There’s simply no need to wait for the human brain to detect water or snow or ice on the windshield so that a human hand can turn the wipers on. That takes too much time.

With modern technology, sensors can detect the problem of moisture on the windscreen long before we can, and react far faster.

This isn’t exactly new. GM’s Cadillac division developed and played with that idea back in the 1950s but they didn’t put it into mainstream production until 1996. The system was crude back then but its purpose was to detect that the windshield was wet and turn on the wipers and even adjust the speed of them in relation to the speed of the vehicle.

Things have changed an awful lot since the 1950s. Electronic systems have taken over. Just about every manufacturer now has some form of automatic rain sensing windshield wiper system on their vehicles. It may just be on their higher-end models right now, but eventually this type of technology will be on every model.

Let’s have a look at the way some of the manufacturers are doing it, and consider some diagnostic strategies. 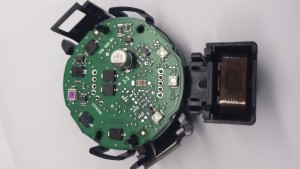 The electronics inside a rain sensor.

The detection of moisture on the windshield is the job of a rain sensor, usually mounted near the rear-view mirror assembly so it doesn’t impede the driver’s vision.

The sensor has relatively few parts but they’re complex. Inside the sensor housing is a light-emitting diode (LED) that sends out a pulse of ultraviolet (UV) light approximately every 40 milliseconds. In the earliest systems, this light was reflected off a lens that was attached to the back of the windshield or embedded inside the windshield. Second generation systems eliminated the lens and simply bounced the UV light off the outside layer of windshield glass.

In either case, a photodiode measures how much UV light is reflected back to it. On a dry windshield, that will be almost all of it. If there is any moisture on the windshield, however, some of the UV light will be reflected in other directions and will not picked up by the photodiode.

Data from the diode is captured by a small microprocessor. Less UV light on the photodiode means more water or moisture on the windshield. It’s this information that determines how fast and how often the wipers are going to operate in order to clean the windshield.

The switch that controls the automatic wiper control operates similarly in most models. It doesn’t actually change the wiping intervals; it adjusts the sensitivity of the LED or photodiode. This allows some fine tuning by the driver to account for personal preferences.

Although the rain sensing is similar on most vehicles, how the information is used to control the wipers is anything but standard. Are you ready for some acronym soup?

Fiat-Chrysler also uses a number of modules before the wipers are activated by the TIPM (Totally Integrated Power Module).

Toyota, on the other hand, sends the rain sensor information directly to the windshield wiper relay assembly. 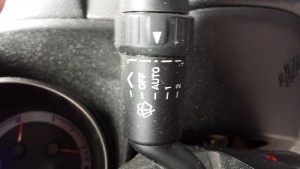 The AUTO wiper switch setting on a 2014 Ford Edge.

You can see that the way each manufacturer uses the sensor information is different but there are similarities in what is done to control the wipers. The main reason that all these modules are involved is that so many things have to be monitored to give totally automatic wiper operation and ensure optimum visibility for the driver. For example, the wiper operation will be affected by the speed of the vehicle, so at some point that information is going to have to be shared and combined with the information from the rain sensor. Obviously, the switch that the driver operates has to be in the ‘automatic’ position.

How often and how fast the wipers travel ultimately depends on the vehicle manufacturer’s information and control architecture. The speed of the wiper arms during the wiping event can even be variably controlled on some models with independent direct drive motors.

Every system is also going to have some form of failsafe in the event that the rain sensor fails or there’s a wiring or communications issue. In most cases, the wiper motor will revert to low speed all the time or it could just revert back to the regular intermittent that we’re all used to. The Ford system falls back to the basic intermittent operation. In that mode the wiper control knob or stalk will not adjust the sensitivity of the rain sensors but will adjust the intermittent timer directly, as in manual mode. This is one more reason that so many modules are involved in the system.

You’re going to need a scan tool in most cases to diagnose an automatic wiper system, there are still fuses that can be checked, but in most cases trouble codes will need to be retrieved.

The output of the rain sensor can often be tested. Most will have just three or four wires. There will be a battery voltage supply, a ground and then either one or two communication wires. You can scope the communications line and look for a square waved information pattern, but a scan tool is going to be your friend when diagnostics are necessary.

Watch for issues caused by cracked windshield in the rain sensor area, delaminating glass or a windshield replacement that has been done poorly. 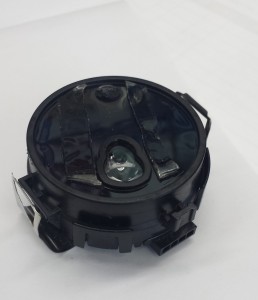 The viewing window and isolation tape are visible on this GM rain sensor.

When replacing a failed or damaged rain sensor you must follow the manufacturer’s recommendations for proper operation. Most will require a new tape or film area that isolates the sensor from the rest of the windshield. Some sensors can be reused but some can’t, so watch for this as an issue.

VW uses a silicone back on their sensor that can be reused but it has to be kept perfectly clean and when reinstalled on the windshield there can’t be any bubbles or debris on the glass side of the sensor when viewed through the glass. Another VW note, if the sensor is bad it will have to be recoded so the VW’s BCM will recognize it.

If replacing a rain sensor on a Mazda, you have to make sure the outside windshield surface is perfectly clean, as soon as the ignition is turned on, the new sensor will be powered up and start a calibration sequence. If the windshield is dirty or wet, it won’t calibrate properly and won’t function properly.

Most techs have likely heard stories about automatic wiper systems engaging when the vehicle is in a car wash, but as a rule most have not given much thought to the way these systems function or get repaired.

I’ve changed rain sensors and wiper switches. I’ve also repaired their wiring. The biggest issue that I’ve seen is with the operator of the vehicle. Most drivers don’t understand how these systems work, and they don’t use them properly. I have to remind them that it’s all explained in their owner’s manual – you know, that book in the glove compartment that they never read!

If automatic wiper systems are complex, it is only because the vehicle manufacturers face a big challenge keeping driver eyes on the road. They’re trying to take as many of the distractions out of driving so the roads are safer. They’ve come a long way in making wiper systems function with minimal input from drivers.

That trend will only continue.