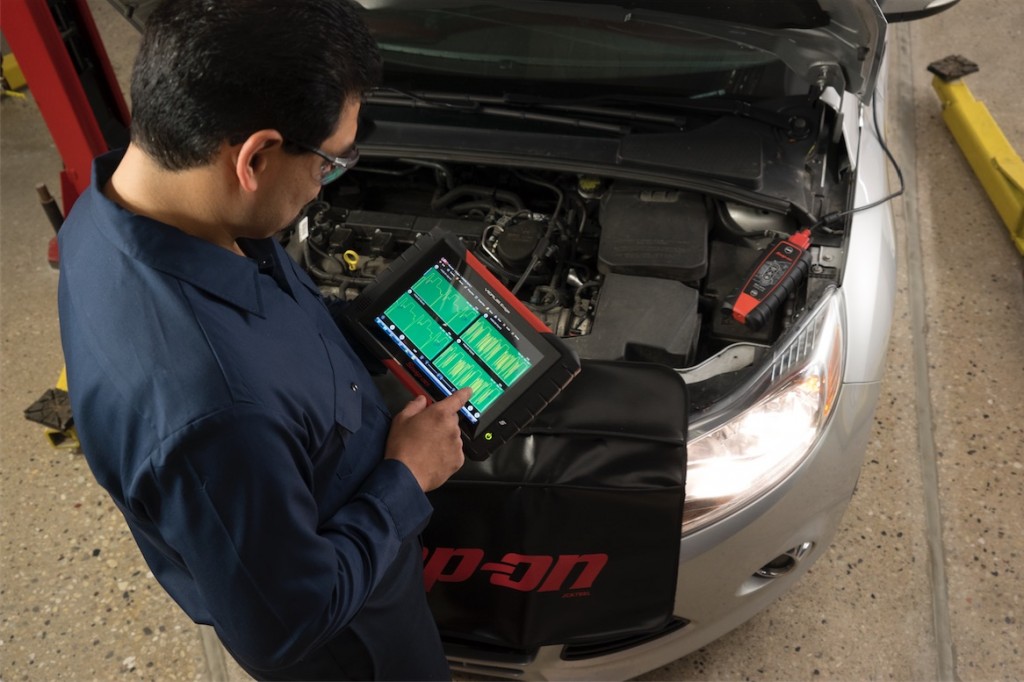 Swapping out chips to change drivability parameters was the start of a technological revolution that has completely redefined vehicle diagnostics.

EPROM chips gave way to EEPROM chips (the extra ‘E’ was for erasable), which gave way to flash memory. The big-box engine analyzers, so common in the 1990s, shrunk down to hand-held size and became more powerful year after year. And the Internet has made vehicle data not only more accessible but more complex than ever.

These days, most automakers offer diagnostics and module updates through PC-based platforms. Technicians can access a vehicle manufacturer’s website and, using a J2534-compliant vehicle communications interface (VCI) device and a laptop, download the latest software improvements for any one of the dozens of electronic modules in the vehicle.

Vehicle diagnostics, and the tools that enable it, are evolving so fast that it’s hard for anyone to keep up.

“This is an opportunity for growth within the aftermarket,” says Dave Hobbs, a technical trainer for Delphi Product and Service Solutions. He believes the future of vehicle diagnostics will provide even greater opportunities for shops to create loyal customers.

“Whenever a repair shop scans an entire vehicle for trouble codes, many customers have a feeling of confidence in their service provider,” he says.

In fact, the ability to understand ‘the big picture’ has never been greater.

“There has been an explosion in the growth of safety and control systems,” says Ed Lipscomb, senior product manager for diagnostics at Robert Bosch. “And it has led to a tidal change in the coverage needs of the aftermarket shop.”

To ride the wave of change, tool makers have had to learn to work ever more cooperatively with vehicle manufacturers.

“Years ago it was hard to get a conversation started with original equipment manufacturers. But cooperation has begun and is increasing,” says Lipscomb. “Are they still driven by their business interests and are we driven by ours? Of course. But we’ve made a lot of progress, that’s for sure.”

John Cabral, vice president of engineering and operations at Blue Streak Electronics, believes technicians face a similar challenge in keeping up, not only with new vehicle technology but the way it is presented in diagnostic tools.

“Along with all the software changes, the hardware design has to keep changing. Our biggest challenge as tool manufacturers is making it easy to understand for the technician who has to use it,” he says.

Mark Schaefer, director of marketing at Snap-on Diagnostics says tool makers now have an eye to standardizing the user experience.

“If I hook up the tool to a Toyota or a Nissan or a Hyundai, or a Ford, I don’t have to relearn how to use the tool every time. It feels like the same diagnostic process. That’s a big part of what we do,” he explains.

It is a challenge. And with the introduction of Internet-enabled apps diagnostic tools will morph even more dramatically. Harlan Siegel, vice president of Launch Tech U.S.A. says the convenience and growing popularity of mobile devices, is driving the change.

“Diagnostic tools need to be able to reach out for resources on the Internet to see what’s wrong with the car,” he says. “They need to be able to use various apps such as lab scope apps, simulator apps, battery-testing apps, video borescoping apps.”

In fact, the ability to diagnose vehicles that aren’t even in the bay has now come to the aftermarket through Internet-based apps.

Hobbs says how technicians will react to new diagnostic capabilities is not always obvious.

“The acceptance rate on new tool features is slow,” he says. “But once technicians see that something is easy to use and effective, they will jump on board.”

The integration of Internet capabilities in the tool offers a powerful new resource to technicians facing a difficult repair job: crowd-sourced diagnostics. 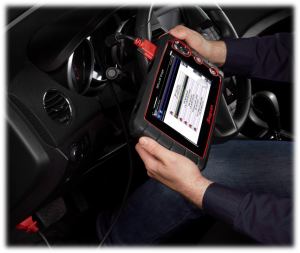 Schaefer says technicians can now access a detailed analysis of millions of repair orders, zeroing in on the experience of technicians around the world who have faced a similar drivability issue or trouble code.

“It gives the technician an idea of where to look. This is what thousands of other technicians did to fix the car,” he says. “We walk them through the process of where to connect, what to test for, and what to look for.”

“To have OE information at your fingertips and a validated troubleshooting tree will improve the efficiency of using a scan tool,” he says.

It’s all about process

With or without all the bells and whistles, diagnostic tools bring best results when technicians follow a logical path to find the solution.

“The basics still need to be covered,” says Schaefer. “The really effective diagnostic techs have a disciplined process, and they start there, rather than getting off on tangents or looking immediately for the complex. They start by looking at the simple. That tends to make them more effective, even on the more complex problems.”

A common four-step process is to scan for codes, seek expert information that will explain the codes, check OEM service bulletins, and test the component that your research has led you to.

“Everything may point you in a direction. But it doesn’t mean the part is actually defective until you’ve verified that,” says Schaefer. “Don’t assume it’s defective. Prove it.”

Donny Seyfer, a Colorado shop owner who is currently serving as chairman of the Texas-based Automotive Service Association, says the verification step should not be overlooked in modern diagnostics.

“We’ve learned to do certain things with the diagnostic tools very well,” he says. “Unfortunately, we’re not so good at proving the repair with the tool after we’re done.”

Seyfer says just-in-time training is embedded in a lot of diagnostic scan tools, allowing technicians to follow the most logical route to finding an engine fault.

This notion of ongoing training is essential when becoming proficient on a diagnostic tools, says Matt Sevart, director of marketing for AE Tools.

“A lot of the questions we hear from technicians revolve around not truly understanding how electricity works,” he says. “Too many technicians don’t have a base-level electrical education – which makes diagnosing and repairing cars a challenge.”

He believes a commitment to education beyond work hours is part of the job these days.

“Techs still need to take ongoing training,” Schaefer agrees. “There’s a lot changing and it’s hard for a lot of technicians to make time for training. It’s not fair or reasonable to expect them to give up their nights and weekends. But they do have to keep learning.”

According to Cabral, the challenge is greatest for technicians at independent repair shops.

“There are so many different technologies being used. For the dealers it is a little easier because they only deal with the vehicles of one manufacturer. An independent repair shop does all makes, all models. That is a big challenge for them,” he says.

Lipscomb points out that it doesn’t have to be formal classroom training, either. “Just networking with other technicians and sharing your knowledge is a really great way to learn. If you just do that you’re going to be way ahead of shops that are closed off and never venture out to network with their peers.”

Avenues to explore include technician resources like the International Automotive Technician’s Network (iATN) where you can get input from technicians on a global level, and YouTube, where individuals and companies (including tool companies) have posted many short exercises in finding vehicle faults.

Technicians who don’t want to learn how to use modern automotive tools or develop their diagnostic skills are still out there, says Schaefer, but tool companies have their eyes on them.

“If they have an aversion to technology it is going to make life tougher for them. So we want to build a tool that suits them,” he says. “Not every technician needs the top-of-the-line tool with diagnostic capabilities, repair information, expert information, built-in shop management, open access to the Internet, and an ability to open software apps. I think every shop needs something like that, but not every technician. It may be overkill for some technicians.”

The important thing for a shop is to have a strategy to use the latest diagnostic technology to make sure customers needs are met.

“This is going to bring people back,” says Siegel. “It builds customer retention because you’re building security and peace of mind into what you’re selling them.”

“Some will see diagnostic tools as an opportunity, and some will see them as a burden,” he says. “I see them as spearheading a revolution of better customer loyalty. The scan tool can be the initial point of contact to making new sales and building a relationship of trust.”

If we show the customer what’s going on under the hood, it gives them more confidence in our abilities.

“Safety and controls will lead to driverless car on public roads, some say in as few as two to five years. What is the impact of that? What systems are we going to have to support that we don’t even know about yet?” he says. “Everything is changing.”

He says new consumer-oriented protocols are being developed that could have huge implications for vehicle design. 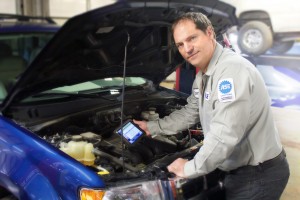 “We can now show the customer exactly what we’re seeing,” says Colorado shop owner Donny Seyfer, a spokesman for Mahle’s new TechPRO diagnostic scan tool. “And when you show them, it gives them a little more confidence in you.”

“There are safety questions revolving around having a constantly connected scan tool – because that’s what telematics is essentially. But logic dictates that telematics will not slow down. It will increase,” he says.

Hobbs believes service techniques and hardware will evolve, just as vehicle technology evolves. In a few years when autonomous vehicles are in widespread use, diagnostic checks and adjustments might well occur in the middle of the night while the vehicle owner is at home in bed.

“Time will tell if shop owners will entertain the thought of a midnight shift for preventive maintenance appointments by autonomous vehicles,” he says.

For now, there’s no getting around the growing importance of modern tooling. If you want to see how integral it is to your work, Schaefer has a suggestion.