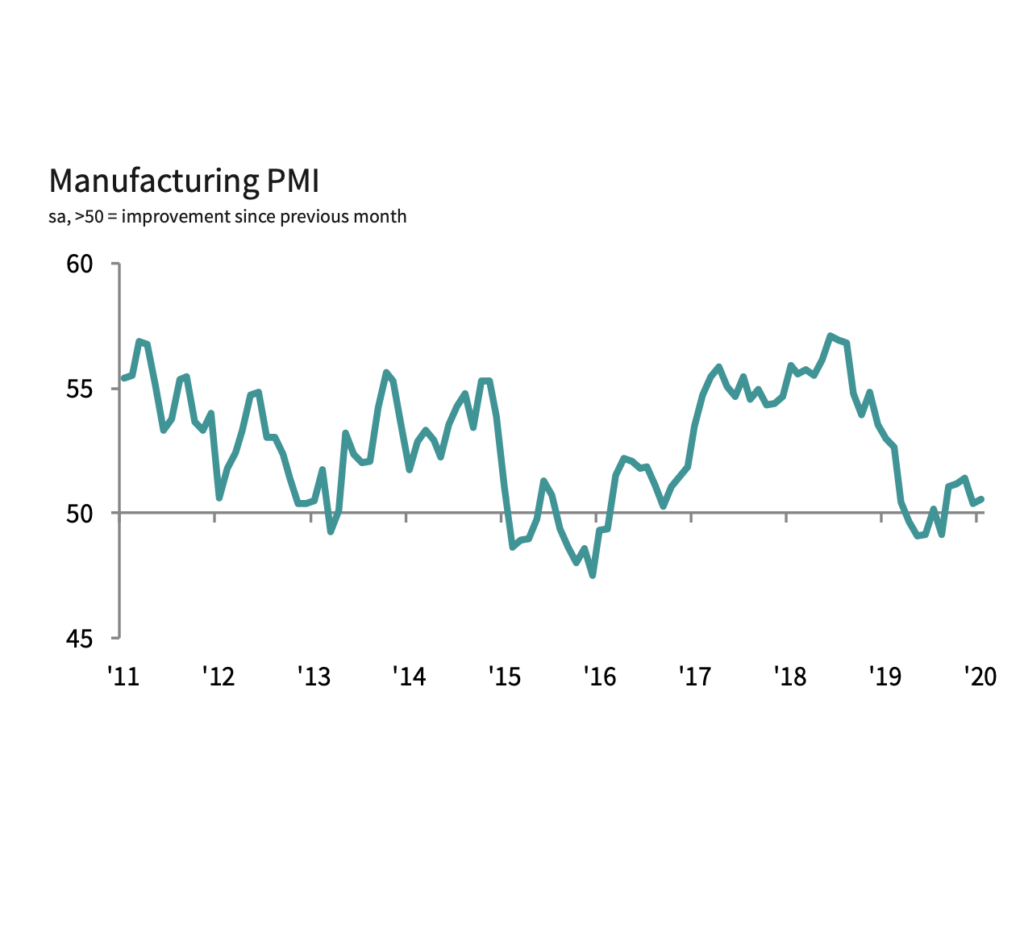 Business conditions improved only slightly across the Canadian manufacturing sector in January, with subdued customer demand continuing to hold back production volumes and staff hiring. Moreover, manufacturers sought to reduce their inventory volumes in response to weak order books. Stocks of purchases dropped for the second month running, while post-production inventories were cut to the greatest extent since March 2019.

On a more positive note, latest data pointed to a solid rebound in confidence towards the year ahead business outlook, which survey respondents partly attributed to hopes of an improvement in global trade conditions. The degree of business optimism was the highest since last July.

The headline seasonally adjusted IHS Markit Canada Manufacturing Purchasing Managers’ Index (PMI) registered 50.6 in January, up slightly from December’s four- month low of 50.4. Improving business conditions have been recorded in each month since September 2019, but the pace of recovery remained only marginal at the start of the year.

January data pointed to divergent trends across the three broad sub-sectors monitored by the survey. Consumer goods producers once again outperformed, with a robust upturn in conditions contrasting with weakness in the intermediate and investment goods categories.

Output across the manufacturing sector as a whole increased marginally in January, which was supported by a return to new business growth during the latest survey period. However, the improvement in new order books was only modest, with survey respondents often citing subdued customer demand and weaker export sales. Lower volumes of new work from abroad have now been recorded in each of the past four months.

A lack of pressure on business capacity allowed manufacturers to focus resources on the completion of unfinished work in January. Reduced backlogs and weak sales volumes led to cautious staff hiring strategies at the start of 2020. Moreover, latest data signalled an overall drop in payroll numbers for the first time since last April.

Efforts to streamline inventories continued in January and this contributed to another drop in purchasing activity. The latest fall in input buying was the sharpest since December 2015. Lower demand for raw materials did not prevent a further deterioration in supplier performance at the start of the year. Longer lead-times were often attributed to adverse weather conditions, shortages of transport capacity and low stocks among vendors.

Meanwhile, input cost inflation was only modest in January and eased to its lowest for four months. A number of survey respondents noted that lower steel prices had helped to alleviate overall cost pressures. Softer input price inflation contributed to the weakest rise in factory gate charges since October 2019.