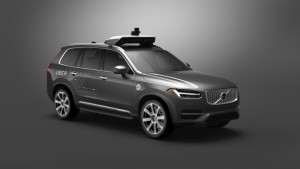 Volvo has announced it has joined forces with Uber to develop autonomous cars.

Together, Volvo and Uber are contributing $300 million to a joint project to develop new base vehicles that will be able to incorporate the latest developments in autonomous technology, including fully autonomous SAE level-4 autonomy. Both companies view the project as the beginning of a long term partnership.

“Volvo is one of the most progressive and contemporary car makers in the world,” said Håkan Samuelsson, president and chief executive of Volvo Cars. “It is a world leader in the development of active safety and autonomous drive technology and possesses an unrivaled safety credibility. We are very proud to be the partner of choice for Uber, one of the world’s leading technology companies. This alliance places Volvo at the heart of the current technological revolution in the automotive industry.”

“Over one million people die in car accidents every year,” Travis Kalanick, Uber chief executive, said. “These are tragedies that self-driving technology can help solve, but we can’t do this alone. That’s why our partnership with a great manufacturer like Volvo is so important. Volvo is a leader in vehicle development and best-in-class when it comes to safety. By combining the capabilities of Uber and Volvo we will get to the future faster, together.”

Autonomous Volvo XC90s with human drivers from Uber could be on the road operating in the ride-hailing service network by the end of the year, according to a report from Automotive News.

In addition, Uber riders in Pittsburgh will be able to hail an autonomous vehicle for a ride starting within a few weeks, according to a report from the Associated Press. There will be an unspecified number of Ford Fusion vehicles with human back up drivers taking part in Uber’s network in the city, operating like any other Uber ride.