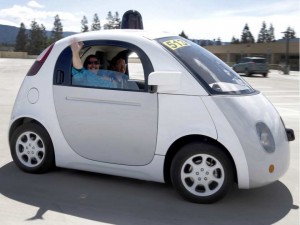 Passengers wave from a new Google self-driving prototype car during a demonstration on at Google’s campus in Mountain View, Calif.

Fiat Chrysler Automobiles and Google parent, Alphabet Inc., are close to a deal on a self-driving car partnership that would develop an autonomous version of the 2017 Chrysler Pacifica minivan, according to U.S. media reports.

The partnership was being cited by the Wall Street Journal and Autoextremist.com, an online weekly industry magazine.

Citing a person familiar with the discussions, The Journal said FCA is in “late-stage talks with Alphabet Inc.’s self-driving car division for a technology partnership.”

The talks have been ongoing for several months as Alphabet seeks industry partnerships, offering a deal to sell self-driving car technology, the newspaper said.

Autoextremist said the deal, “in the short term would include development of an autonomous version of the Pacifica minivan,” which is assembled at the Windsor Assembly Plant.

The partnership would give Google access “to manufacturing capability and an existing dealer network for the distribution of its future vehicles.”

John Krafcik, CEO of Google’s Self-Driving Cars operation, and FCA CEO Sergio Marchionne began talking shortly after the Consumer Electronics Show in Las Vegas in January, and have been in final negotiations over the last three weeks, according to Autoextremist.

Later this year, FCA will launch a plug-in, hybrid version of the Pacifica — the automaker’s first, mass-produced PHEV.

Marchionne, meanwhile, has been on the hunt for an industry partner in his bid to reduce skyrocketing costs associated with development of redundant technology.

But Karl Brauer, senior analyst for Kelley Blue Book, said the eight-passenger Pacifica would be an ideal, self-driving vehicle for Google’s purposes.

“The Pacifica makes complete sense because I would see Google approaching this more from a public transportation versus private ownership perspective,” said Brauer. “Google is always thinking in terms of ‘how do we maximize efficiency of private transportation.’ A bigger vehicle that can carry as many people as possible is a critical element to this.”

The Pacifica’s design, size and passenger capacity as well as provision for battery storage make it “a great candidate for a good self-driving car,” he said.

During a conference call with analysts to discuss FCA’s first-quarter financial results, Marchionne was asked whether he was pursuing partnerships with high-tech giants, such as Google and Apple.

“I think dialogue continues with people who are interested in exploring their relevance in the automotive world and we will continue to help them try and find a way out. And time will tell,” Marchionne said. “I think that we need time to find out whether some of these arrangements are commercially relevant to FCA. But hopefully we’ll have something to say within 2016 on that matter publicly.”

Brauer said a Google partnership would propel FCA ahead of its competitors in the development of self-driving vehicles.

“It proves how dynamic the industry is now,” he said. “FCA is on the trailing edge toward autonomous driving while General Motors and Ford have made more overt efforts; so have Volkswagen, Honda and Toyota. But one partnership between FCA and Google completely changes the landscape overnight.”