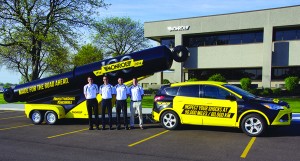 The Monroe Shockmobiles will help celebrate the Monroe brand’s 100th anniversary this year while emphasizing the critical “Everything Gets Old. Even Your Shocks” inspection message at consumer tour stops throughout the United States and Canada. Both vehicles feature 100th anniversary graphics, “Made for the Road Ahead” message, and “#InspectYourShocks” and “#Shockmobile” hashtags.

“The two Monroe Shockmobiles are a critical part of the ‘Everything Gets Old’ campaign as well as our 100th anniversary campaign, ‘Made for the Road Ahead,’” said Denise Hanefeld, manager of marketing communications for the Monroe brand. “Thousands and thousands of consumers see this impactful reminder through these summer tours. The Shockmobiles give us a powerful, direct link to vehicle owners who need to be reminded to inspect their ride control components for wear as this could directly impact safe vehicle steering, stopping and stability.”

The Monroe Shockmobiles also play a pivotal role in the Monroe brand’s “Everything Gets Old” campaign, which is designed to remind consumers that their vehicles’ shock absorbers and struts eventually wear out and need to be replaced. Because these ride control components are “hidden” beneath the vehicle, the Shockmobiles feature a very eye-catching, 25-foot-long, 10-foot-high, translucent Monroe OESpectrum shock absorber that helps remind consumers about the importance of inspecting shocks and struts at 50,000 miles/80,000 kilometers.

While ride control products aren’t as visible as many everyday consumer items, they play a crucial role in protecting drivers and passengers by helping to provide safe steering, stopping and stability. The custom-built, LED-illuminated Shockmobiles are towed by a specifically equipped sport-utility vehicle that features matching yellow-and-black graphics communicating the inspection message.