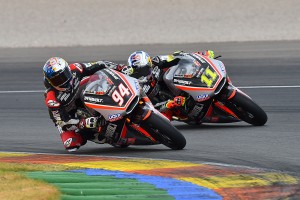 Liqui Moly opens the throttle. Germany’s motor oil and additive specialist has taken over sponsorship of the Canadian Superbike Championship Series. “This represents a tremendous stimulus for our motorcycle products as well as for our brand familiarity in general”, said Sebastian Zelger, who is responsible for Liqui Moly business in North America.

The commitment to sponsor the Superbike Championship is Liqui Moly’s first major engagement in Canadian motorcycling sports. In addition to sponsoring the entire series, the second highest class will now be known as Liqui Moly Pro Sport. “Technically we are already at the top for some time – now we want to show this externally”, continued Sebastian Zelger.

Although Liqui Moly has its roots in the automotive business, the company also offers a complete line of chemical products for motorcycles: Motor oils and additives, fork oils and filter oils, cleaner and care products. In Canada the motorcycle products are marketed by Motovan.

Liqui Moly’s presence is also reflected by the MotoGP, where all teams in the Moto2 and Moto3 classes use motor oil from Germany. Sebastian Zelger: “For us, the Canadian Superbike Championship is the perfect supplement to our worldwide engagement with the MotoGP.”

The first Canadian Superbike Championship races will be held from May 27th to 29th in the Shannonville Motorsport Park, ON.