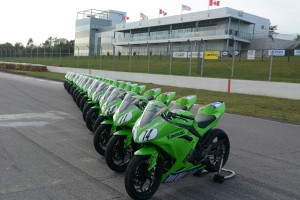 Canadian Kawasaki Motors will support a 10-race, five-weekend program in conjunction with the Mopar CSBK Canadian National motorcycle road racing Championship in 2016. After a strong debut at Canadian Tire Motorsport Park during the National events last August, the spec series for lightly-modified 300cc twin-cylinder Ninja street-based bikes will take part in all the events, as well as a preview, this season, as well as on the 2017 Mopar CSBK Series.

“The goal for all spec racing is straightforward,” explained Canadian Kawasaki Motors National Sales and Marketing Manager Bob Calwell, a competitor at the opening event last year. “The Ninja 300 is a popular, inexpensive, sporty bike, and the modifications are limited so that the racers can control costs.

“This way, you get closer racing that offers a showcase for up-and-coming competitors. We are very confident that our new Championship will be good for both Kawasaki and Canadian road racing.”

The series will open with two rounds at the opening RACE Regional of the season at Shannonville Motorsport Park May 13-15, this weekend also offering a Friday school for new competitors who require an instructional event prior to competition.

To sign up for the special Kawasaki Ninja 300 spec Competition School at Shannonville on Friday, May 13, contact Chris Chapelle, 613-966-7223, or race@shannonville.com. Pre-booking is required and space is limited, and riders must provide their own Ninjas.

After that, the series continues at the four Mopar CSBK National weekends of the Series, with two points and purse paying races during each weekend. The overall series Champion will be crowned at the traditional season-ending Double Header weekend at Canadian Tire Motorsport Park in Ontario, August 19-21. The total per-race purse for each round of the 10-race series is $1,500.

Kawasaki Ninja 300 spec series competitors must possess a valid, 2016 Canadian Club racing licence, and be a minimum of 15 years of age at the start of the season. There is no maximum age for racers but competitors cannot have competed as Pros in the recent past (five years Regionally, 10 years Nationally) – all riders in the series must be Novices or Amateurs, or older unretired Pros. Former Pros will not be eligible for prize money or Championship Series Points.

The bikes must remain in showroom condition, except for the following changes: 1. Dunlop Sportmax Alpha 13 race spec tires must be utilized; 2. A fluid-retaining, sealed, aftermarket race fairing with number panels must be used; 3. A brake guard protector must be installed;  4. All typical race spec fitting and fasteners must be lock wired or contained.

Optional Changes allowed include: 1. HIndle Racing aftermarket racing slip on pipe can be fitted; 2. Hindle set-back plates can be used with the stock pegs and brackets; 3. Dynojet V Power Commander and Quick Shifter can be fitted; 4. Elka Racing rear shock can be utilized; 5. Restricted front fork modifications carried out by Accelerated Technologies, up to and including a K-Tech kit, are permitted; 6. Crash guards or frame sliders can be fitted. All other items must remain as delivered with the original, OE model.

Potential competitors who have requested purchase for one of these built bikes will be contacted by a Canadian Kawasaki Motors District Manager with details regarding their 300cc racer. Each bike will be sold through the Canadian Kawasaki Dealer network.