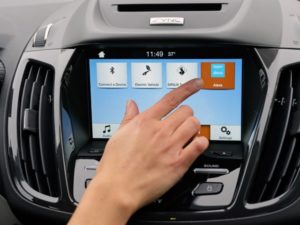 Paying for gas without leaving the car, projecting a navigation map from your smartphone to the in-car touch screen, and using a new app that could help you lower vehicle insurance rates are all now possible thanks to Ford SYNC AppLink software.

Ford Motor Company has announced cutting-edge innovations with ExxonMobil, Samsung, DriverScore, Sygic and Dash Radio to enable customers to have a more enjoyable, productive and convenient time behind the wheel.

These new experiences demonstrate the power of Ford SYNC AppLink to integrate the latest in technology trends – mobile payments and navigation, wearables, usage-based insurance and streaming music – with the car.

And to drive creation of even more experiences, Ford is conducting global hackathons to introduce its Ford Developer Program to software programmers – giving them access and tools to turn their apps, or even just their ideas, into reality.

The latest innovation to come from a Ford hackathon is integration of IBM Watson – showcasing the potential to provide customers with access to voice-controlled digital assistants in the car.

This year’s hackathon winner leveraging IBM Watson technology – a machine-learning, question-answering system – shows that with AppLink, Ford is well positioned to capitalize on the popularity and capability of cloud-based digital assistants, which are on the rise.

Watson uses natural language processing and machine learning to reveal insights from large amounts of unstructured data. Drivers can easily control the Watson app using their vehicle’s touch screen, steering wheel controls and voice capability. If developed into a consumer offering, it could ultimately serve as a comprehensive in-vehicle assistant that addresses requests ranging from “What’s the weather like?” to “What’s on my calendar?” to “Where’s the nearest restaurant?”

The Watson app uses the voice pass-through capabilities of both AppLink and other SYNC tools that provide access to vehicle fuel level. When fuel is low, the app issues a verbal alert and suggests nearby gas stations along the vehicle route. Working exclusively with Ford SYNC, it combines unique machine-learning capabilities to answer questions more effectively over time.

“The abundance of new apps we’re seeing is a direct result of the ease and flexibility of the SYNC AppLink platform for connecting with new technology,” said Doug VanDagens, director Ford Connected Vehicle and Services. “Digital assistants are a big trend because they provide in-vehicle convenience while letting drivers keep their eyes on the road and hands on the wheel.”

The Ford hackathon was held in September as part of the company’s annual SYNC AppLink Developer Conference – in conjunction with CTIA Super Mobility 2016™ in Las Vegas. Submissions and participation came from across the globe, including the United States, Canada, Dominican Republic, United Kingdom, India and Brazil.

“Though the app is still a prototype, we’re really excited because we think it has the potential to deliver a lot of value to consumers,” said Dean Phillips, lead developer on the team, which was comprised of IBM employees. “SYNC 3 and AppLink provide an easy way for developers to modify and build applications to work in vehicles seamlessly, without causing driver distraction.”

In-car navigation is made easier as Ford offers a new feature to project navigation apps from the smartphone to the vehicle’s SYNC 3 touch screen.

Using a smartphone paired to the vehicle via USB cable, control of the Sygic app is removed from the smartphone. The app is automatically projected to the vehicle touch screen and linked to voice control. The feature works to help make navigation apps better by reducing drivers’ urges to pick up and look at their mobile devices.

Ford and ExxonMobil introduce a new e-commerce app that helps make the chore of refueling and payment faster, easier and more secure. The feature comes as mobile commerce continues to gain traction, with growth in on-the-road purchases from 2013 through 2016 projected to be 42 percent, according to a May Forbes article.

Leveraging ExxonMobil’s Speedpass+, an automated payment system now available for Ford SYNC 3, drivers can use voice commands to search for and find participating Exxon Mobil stations, as well as pay for fuel.

Ford first introduced a mobile payment app in 2014 when it worked with Domino’s Pizza to add AppLink compatibility for its app – making the technology capable of placing a pizza order using a few simple voice commands.

With insurance premiums on the rise nationwide, Ford introduces DriverScore – the first smartphone app to create a personalized driving score based on individual driving behavior that can lead to lower insurance rates.

Other usage-model insurance programs are based on performance of a vehicle, which often can have multiple drivers, so the driving behavior reported back to an insurance company isn’t personalized. Some other programs require raw vehicle data and driving performance data be shared with insurance carriers – information you might prefer to keep to yourself.

Developed by IVOX, DriverScore users share what they want, when they want. Only the score is shared, not the specific data points. DriverScore accesses vehicle data for consumers’ direct benefit. The user can agree to let the app’s sophisticated algorithm access vehicle data to objectively analyze driving patterns. The app takes into account speed, acceleration, braking, location and time of day.

With the popularity of wearable devices on the rise, Ford is offering vehicle integration to help make life more convenient and personalized.

Samsung Gear S2 and S3 smartwatch owners will soon be able to integrate their smartwatches to their Ford SYNC system for convenient parking and alerts that help them remain attentive in the car. The feature acts as an easy-to-use digital assistant that sends helpful prompts right to your wrist.

The integration will include logging vehicle location upon parking and navigation back to the parking spot. It will help ensure attentiveness by sending audible chimes and voice alerts at intervals convenient to the driver.

Launching soon, Dash Radio – the biggest all-original digital radio broadcasting platform in the world – will soon be accessible to consumers via an app on their SYNC touch screen. Running 24/7 and commercial-free, Dash Radio features more than 80 stations and more than 300 top DJs, artists and figures in the entertainment business. Dash Radio is available for free in an easy-to-use interface.