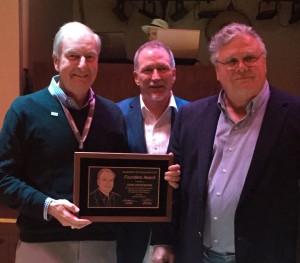 The ETI Founder’s Award was established in 1985 to honor those individuals who have made numerous important contributions to the institute. It is given when deserved and is not subject to any time schedule.

Mr. Wiedemann has demonstrated unselfish dedication to the principles that drive ETI since he began his involvement with the institute over 26 years ago.  Mr. Wiedemann embodies the intent of ETI’s Founders Award.

During his tenure as president of ETI’s board of directors, Wiedemann said, “Our task at ETI is to help turn challenges into opportunities for our members. With this goal in mind, there are three areas that I want to focus on during my term as president to help make this happen. They are value, collaboration, and engagement.”

“John has done so much for ETI, has a tremendous passion for the industry, and is an outstanding role model for getting out of the institute what you put into it,” said Jessie Korosec, ETI marketing manager.  “John cares so much about the institute, the members, and its success.  He is one of the most deserving recipients of the Founder’s Award and ETI appreciates all of his efforts and hard work over the many years he has been involved in ETI.  John has always led by example and with integrity and continues to be an asset to ETI.”

Mr. Wiedemann started his automotive career in 1989 at Mac Tools.  It was then that he became actively engaged in the products and services that support the automotive aftermarket.  In early 1990 he attended his first ETI meeting at one of the institute’s annual events.  During the 90’s Wiedemann became involved in several project groups and committees where he began to meet and spend time with other members of ETI.  One of those members was ETI’s current executive manager Greg Potter who adds, “I cannot think of a more worthy recipient of this rare award. John has always gone above and beyond in his effort with, and support of, the institute.”

In 1998, John went to work for Actron Manufacturing and became heavily involved in ETI as a member of the board of directors.  After serving on ETI’s board, John moved up to the executive committee.  He then moved through the ETI positions of secretary/treasurer, VP of marketing, VP of programs, and became president of ETI in 2008 while working for JS Products in Las Vegas Nevada.

After leaving JS Products in 2008, John went to work for Weld Racing and during that time and since his retirement from Weld, he has remained very active with ETI, as a member of both the marketing and program committees.

Mr. Wiedemann graduated from the University of New Haven, West Haven, Connecticut and holds an MBA and B.S. in Mechanical Engineering.