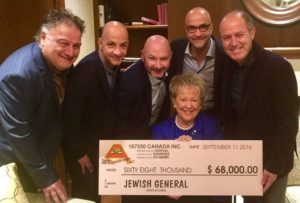 Alex Trichas, Nick, Chris, and André Dimopoulos run a successful auto parts business, with a well-earned reputation for excellence. Thanks to the Dorval, Sources and St-Henri Walkathon, an annual event that raises funds for Hope & Cope’s cancer exercise program, they also are making a name for themselves as skilled fundraisers who care deeply about the welfare of cancer patients.

On November 24th, Alex, Nick, Chris, André, and their right-hand man, Gus Anagnostaras, dropped by Hope & Cope’s Wellness Centre to present a cheque for $68,000 – proceeds of the 9th annual Walkathon held on September 11th – and to share insights about what they’ve learned over the years.

As Alex pointed out, initially, they chose to host a walkathon because it involves comparatively lower costs than, for example, a fancy dinner-dance or a golf tournament. “We are very proud of the fact that we cover the expenses ourselves, allowing us to turn over 100% of the proceeds to Hope & Cope.”

As an added bonus, noted André, this annual event has become the charity of choice for many participants, who are then able to recommend Hope & Cope to people they know well who are suddenly faced with a cancer diagnosis.

Calling suppliers, clients, friends and acquaintances and managing the logistics of putting on this annual event is time-consuming but well worth the effort. Asked what motivates them to dedicate a good part of their summer to organizing the walkathon, Gus spoke for everyone when he described the satisfaction that comes from bringing people together for such a worthwhile cause. “The first year, I offered to do a little BBQ and it’s grown tremendously every year. Yes, it’s hectic, it’s work, but when the day is finished, we always say, WOW!”

No stranger to health challenges of his own, the positive attitude that Gus exudes is a source of inspiration to his family, friends, and colleagues. “Everybody’s been touched by cancer,“ Gus explained. “My attitude is, we’re here today; we can do something positive today.”

Nick recalled how moved he was by the gratitude expressed by Wellness Centre participants. “Three years ago, when we came to the Centre to present a cheque, we met several patients who were so grateful. They told us how his exercise program has been such an important part of their recovery, helping them to regain their strength. I finally understood the impact of what we are doing.”

Another motivator, according to Chris is the simple rewards that come from giving back. “It’s really about gratitude, for my own health, for Hope & Cope and for being part of such a supportive community.”

For their part, Hope & Cope Founder, Sheila Kussner, and executive director, Suzanne O’Brien, were effusive in their praise of Alex, Nick, Chris, Andre, and Gus. “To five wonderful philanthropists and incredibly passionate supporters of our cause, we toast our continued collaboration and your continued success.”

For more photos, check out the Facebook page: https://www.facebook.com/hopecopemontreal/