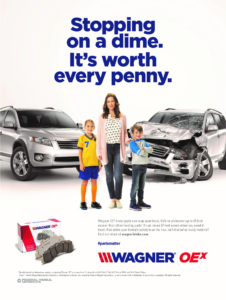 A new ad campaign from Wagner will aim to educate customers about brake pads and stopping distance.

Federal-Mogul Motorparts said in a press release that its Wagner OE brake pads from can stop pickups, SUVs and CUVs 50 feet sooner than the competition. It’s this message of stopping sooner that will be promoted through the campaign.

Ads will run on television, consumer magazines, radio and digitally. The television campaign will emphasize family safety and show the impacts of being able to stop sooner.

“The ability to stop sooner is a powerful message for drivers because they understand that every foot is critical when they are trying to avoid an accident,” said Laura Soave, senior vice president and chief marketing and communications officer at Federal-Mogul Motorparts. “We want to help consumers understand that quality and performance absolutely matter when it comes to the brake pads and other parts they choose for their vehicles.”

The company wants “to help start a conversation between vehicle owners and their parts and service providers about the importance of relying on parts that are engineered to provide exceptional performance and reliability,” she added.

The company focuses on SUVs and CUVs because these are the fastest growing market segments, the announcement said.