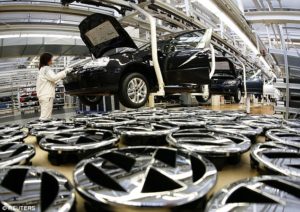 Emerging from the aftermath of the dieselgate emissions cheating scandal, the VW Group has signed a new internal pact to secure its future – which includes laying off 30,000 members of its global workforce.

In a statement, the carmaker said it was taking measures to return the Volkswagen brand to ‘a path of profitable growth’ after suffering 14 months of crippling costs associated to steps it took to deceive emissions tests.

In the pipeline since June, the manufacturer and its trade union’s agreement will save the VW Group a projected €3.7 billion( $3.96 Billion U.S.) a year, the release said.

The car brand hopes the agreed tactic will double profit margins from 2% to 4%.

However, it will come at the cost of jobs for 5% of the entire workforce worldwide, with 23,000 members of staff being made redundant in Germany alone as a result.