Unless otherwise indicated, all amounts are expressed in US dollars.

“2015 has been a pivotal year for Uni-Select, namely marked by a different asset profile and the development of a truly customer value-creating sales approach. In this context, I am very pleased that both of our business units have been delivering consistent organic growth throughout the year, while at the same time directly contributing to making Uni-Select a more profitable and increasingly competitive organization”, said Henry Buckley, president and chief executive officer of Uni-Select. “As we enter 2016, our objective is to continue to actively pursue our growth objectives through strategic acquisitions and organic growth initiatives aimed at increasing market share across both our business segments.”

Consolidated sales for the fourth quarter were $259.2 million, a 39.3% decrease mainly due to the sale of the net assets of Uni‐Select USA, Inc. and Beck/Arnley Worldparts, Inc. Excluding sales from the net assets sold, consolidated sales grew 0.6% compared to the same period last year. Additional sales from recent acquisitions and organic growth exceeded the impact of the declining Canadian dollar, which alone penalized sales by $17.5 million or 6.8%.

On an organic basis, consolidated sales grew by 2.6%, fuelled namely by the recruitment of new customers in the paint and related products segment combined with the results of the development of a customer-centric strategy in the automotive products segment, as well as by overall pricing increases.

The Corporation generated an EBITDA of $24.0 million, compared to $27.3 million last year, while adjusted EBITDA was $20.0 million compared to $27.9 million last year. The adjusted EBITDA margin grew to 7.7%, up 1.2 point, driven by the sale of the net assets having a lower margin compared to the remaining operations, as well as by a combination of organic growth across both segments and recently completed accretive acquisitions.

As indicated above, the Corporation’s results are presented in US dollars. Once converted to Canadian dollars, adjusted earnings per share were C$0.69 for the fourth quarter of 2015, down 4.2% compared to C$0.72 for the same quarter in 2014.

Sales for the automotive products segment were $105.7 million, from $285.3 million in the prior year. Excluding the impact on sales related to the net assets sold, sales decreased by 8.7% compared to 2014, while the weaker Canadian dollar alone accounted for 15.1% of the decrease for the same period. These results were partly offset by organic growth and sales from recent acquisitions. Segment organic sales grew 2.3% in the fourth quarter, driven by an increased regional focus on customer needs, an enhanced product offering and pricing increases. EBITDA for the automotive products segment decreased to $13.0 million in the fourth quarter, from $13.4 million last year, while adjusted EBITDA decreased to $7.1 million from $14.0 million in 2014. The EBITDA margin and adjusted EBITDA margin reached 12.3% and 6.7% respectively, up 7.6 and 1.8 points from 4.7% and 4.9% in 2014. The EBITDA margin performance of this segment was attributable to the net assets sold, which had a lower EBITDA margin than the ongoing operations, combined with a favorable distribution and product mix, strategic buying and accretive business acquisitions.

The paint and related products segment recorded sales of $153.6 million, up 8.2% from 2014, or up 2.8% organically, namely as a result of the recruitment of new customers. The segment EBITDA margin was 10.7%, down 0.9 point from last year. This performance is namely attributable to unexpected employee medical claims and a higher expense level in recently acquired businesses, offsetting the sales leverage of the organic growth.

Consolidated sales for 2015 decreased by 24.0% to $1,355.4 million, however when excluding the impact of the sales from net assets sold, this represents an increase of 0.3%, a performance explained by the same factors as for the fourth quarter. On an organic basis, sales grew a healthy 2.6% in 2015 but were impacted by the declining Canadian dollar, which alone penalized sales by $66.5 million or 6.3%.

The Corporation recorded a negative EBITDA of $53.3 million for 2015, compared to an EBITDA of $105.5 million last year. This is explained by non-recurring charges of $150.3 million in impairment and transaction charges in connection with the net assets sold and restructuring charges to rightsize the corporate operations. Adjusted EBITDA for the twelve-month period decreased by 13.3% while the adjusted EBITDA margin increased by 0.9 point, from 6.2% to 7.1%.

As indicated above, the Corporation’s results are presented in US dollars. Once converted to Canadian dollars, adjusted earnings per share for 2015 amount to C$3.41 compared to C$2.87 in 2014, up 18.8%.

Prior to their disposal on June 1, 2015, the net assets sold over the course of the first half of the year were included in the automotive products group for segmented reporting.

Accordingly, sales of the automotive products segment were down 39.2% for 2015 to $736.6 million, or down 8.8% excluding the impact of the net assets sold, mainly related to an impact of 13.9% from the weaker Canadian dollar and partially compensated by organic growth and sales from recent acquisitions. On an organic basis, sales grew 1.8% in 2015. A negative segment EBITDA of $103.9 million was recorded during the same period, down from $52.8 million last year, a decline explained by impairment and transaction charges related to the sale of the net assets. Segment adjusted EBITDA decreased 37.2% to $36.9 million while the adjusted EBITDA margin grew 0.1% as a result of the performance of the operations related to the net assets sold, which had a lower EBITDA margin than the ongoing operations, while the remaining operations improved gross margin with strategic purchases, a favorable distribution and channel mix and accretive business acquisitions.

The paint and related products segment recorded sales of $618.8 million in 2015, up 7.9%, including a solid 3.3% organic sales growth, a performance mainly driven by the recruitment of new customers. Segment EBITDA reached $70.0 million, up 13.6% from 2014, while segment adjusted EBITDA reached $70.4 million, up 14.3%. Segment adjusted EBITDA margin reached 11.4%, up from 10.7% in 2014. This growth is mainly attributable to the sales leverage and accretive business acquisitions as well as strategic products buying.

The Management’s Discussion and Analysis (MD&A), consolidated financial statements and related notes for the year 2015 are available in the “Investors” section on the Corporation’s website at uniselect.com as well as on SEDAR at sedar.com. The Corporation’s Annual Report may also be found on these websites as well as other information related to Uni-Select, including its Annual Information Form.

The information included in this press release contains certain measures that are inconsistent with IFRS. Non-IFRS financial measures do not have any standardized meaning prescribed by IFRS and are, therefore, unlikely to be comparable to similar measures presented by other entities.

Organic growth – This measure consists of quantifying the increase in pro forma consolidated sales between two given periods, excluding the impact of acquisitions, sales and disposals of stores, net assets sold, exchange‐rate fluctuations and when necessary, the variance in the number of billing days. Determining the rate of organic growth, based on findings that Management regards as reasonable, may differ from the actual rate of organic growth.

EBITDA – This measure represents net earnings excluding finance costs, depreciation and amortization, equity income and income taxes. This measure is a financial indicator of a corporation’s ability to service and incur debt. It should not be considered by an investor as an alternative to sales or net earnings, as an indicator of operating performance or cash flows, or as a measure of liquidity, but as additional information.

Free cash flows – This measure corresponds to the cash flows from operating activities according to the consolidated statements of cash flows adjusted for the following items: changes in working capital items, equity income, acquisitions of property and equipment and difference between amounts paid for post‐employment benefits and current year expenses. Uni‐Select considers the free cash flows to be a good indicator of financial strength and of operating performance because it shows the amount of funds available to manage growth in working capital, pay dividends, repay debt, reinvest in the Corporation and capitalize on various market opportunities that arise. The free cash flows exclude certain variations in working capital items (such as trade and other receivables, inventory and trade and other payables) and other funds generated and used according to the statement of cash flows. Therefore, it should not be considered as an alternative to the consolidated statement of cash flows, or as a measure of liquidity, but as additional information.

Total net debt – This measure consists of long‐term debt, including the portion due within a year, net of cash. 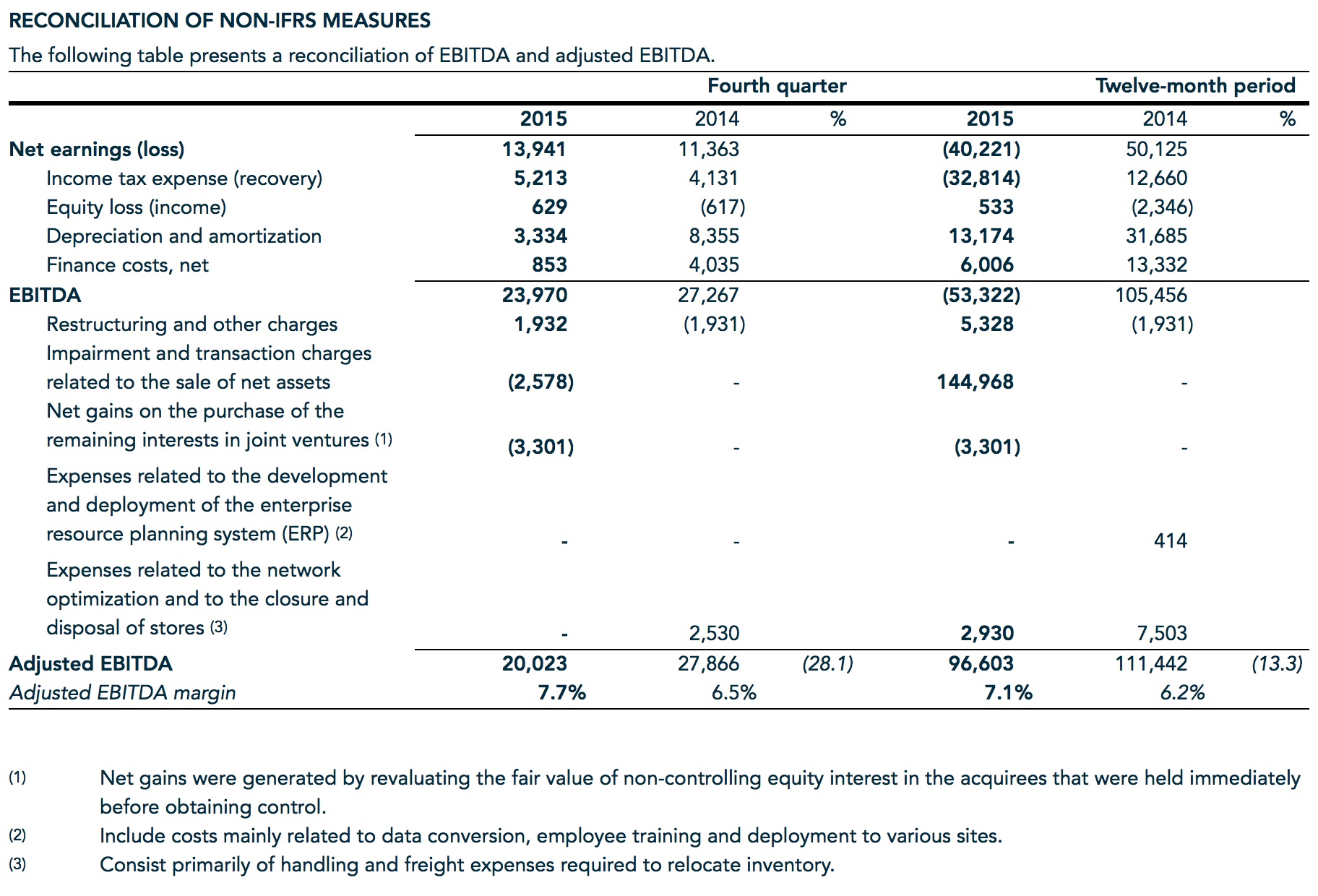 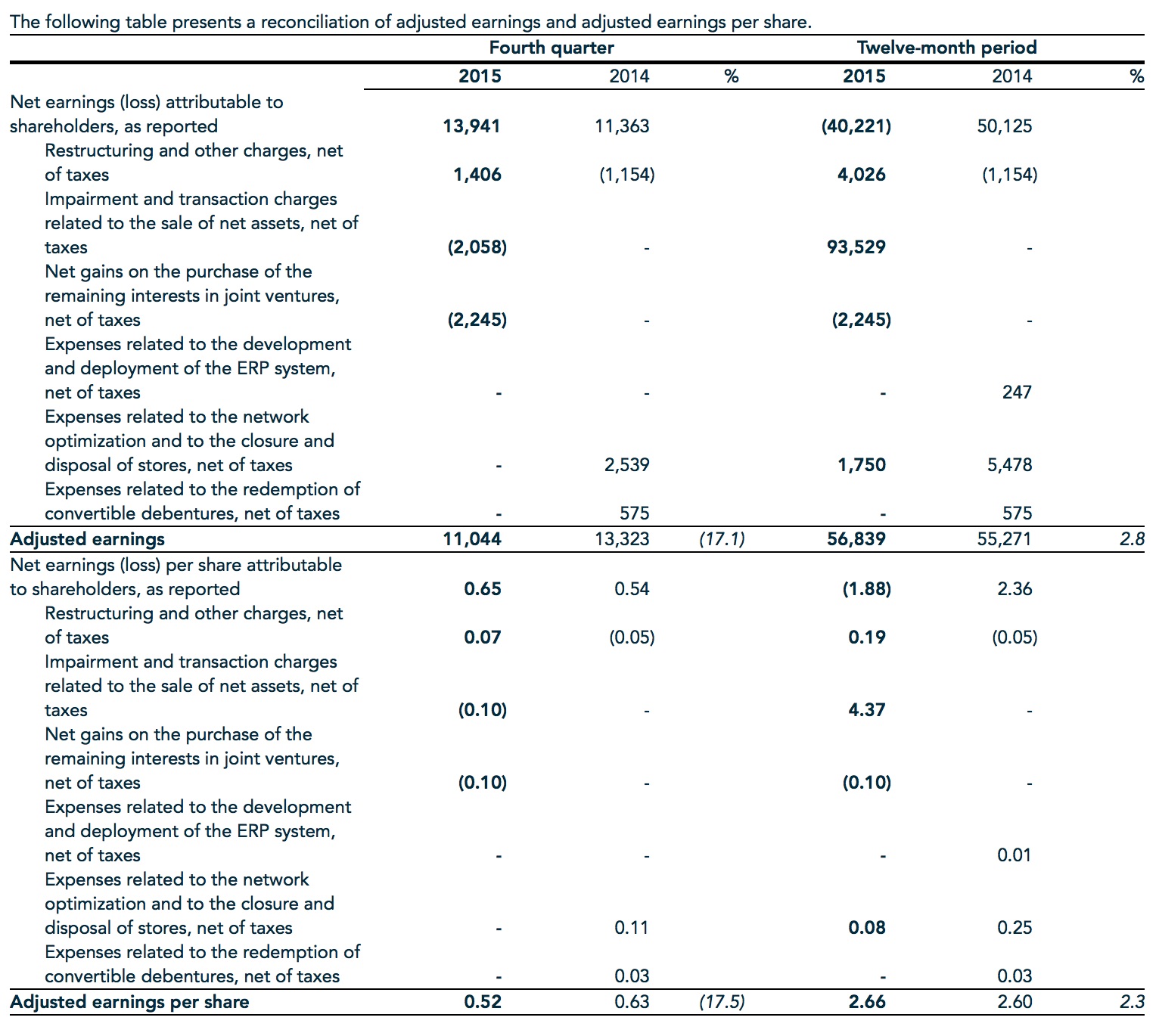 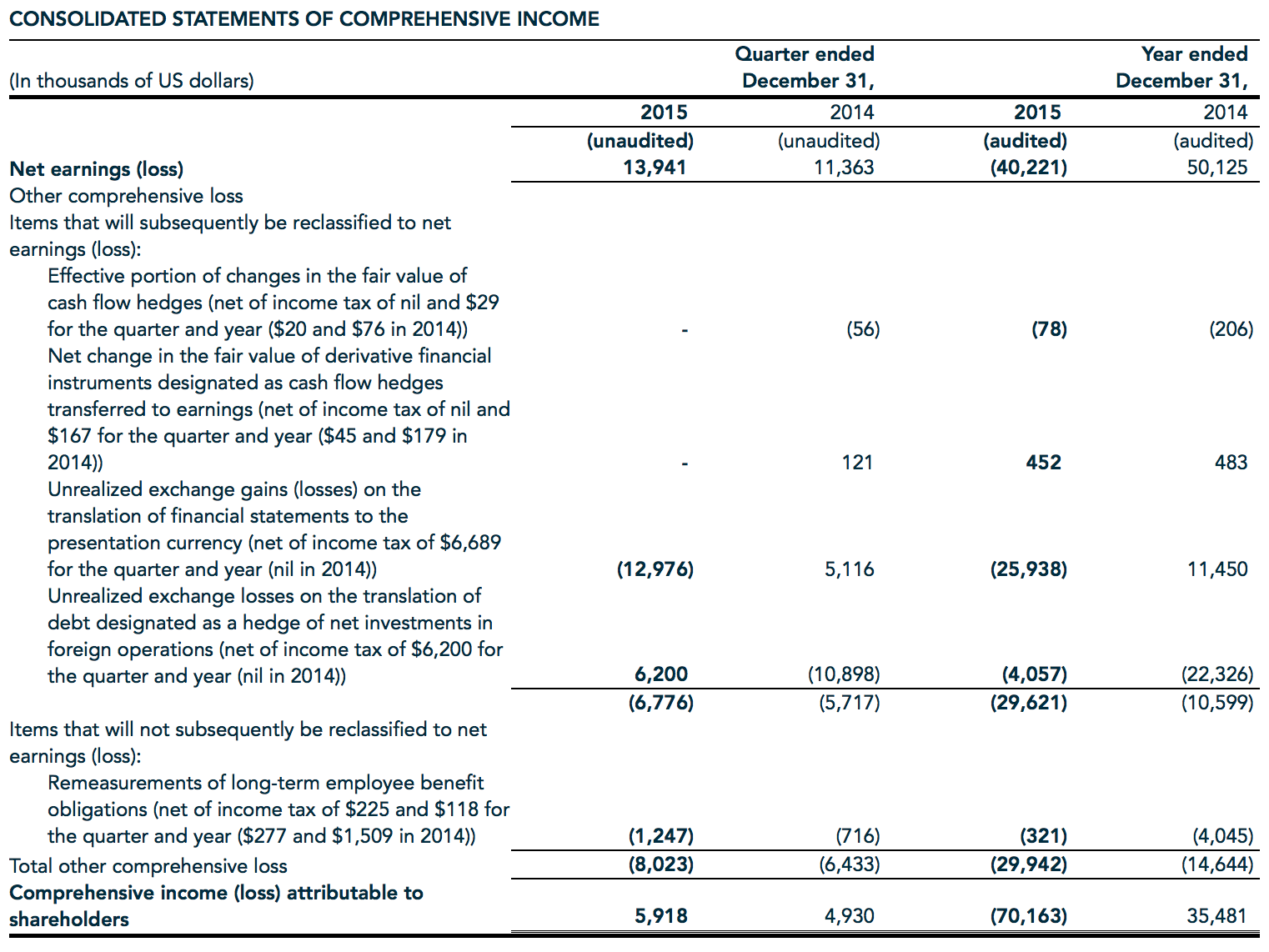 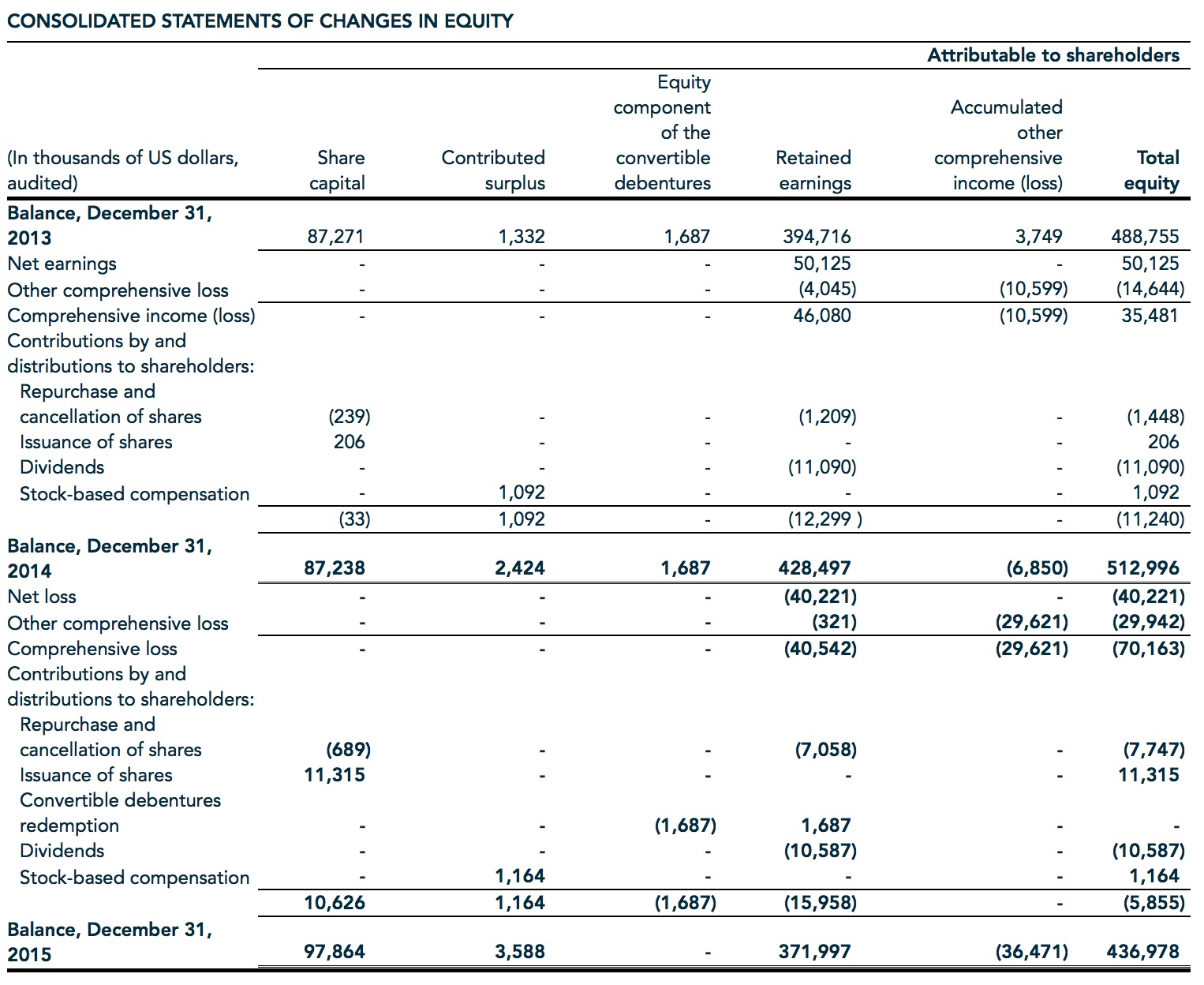 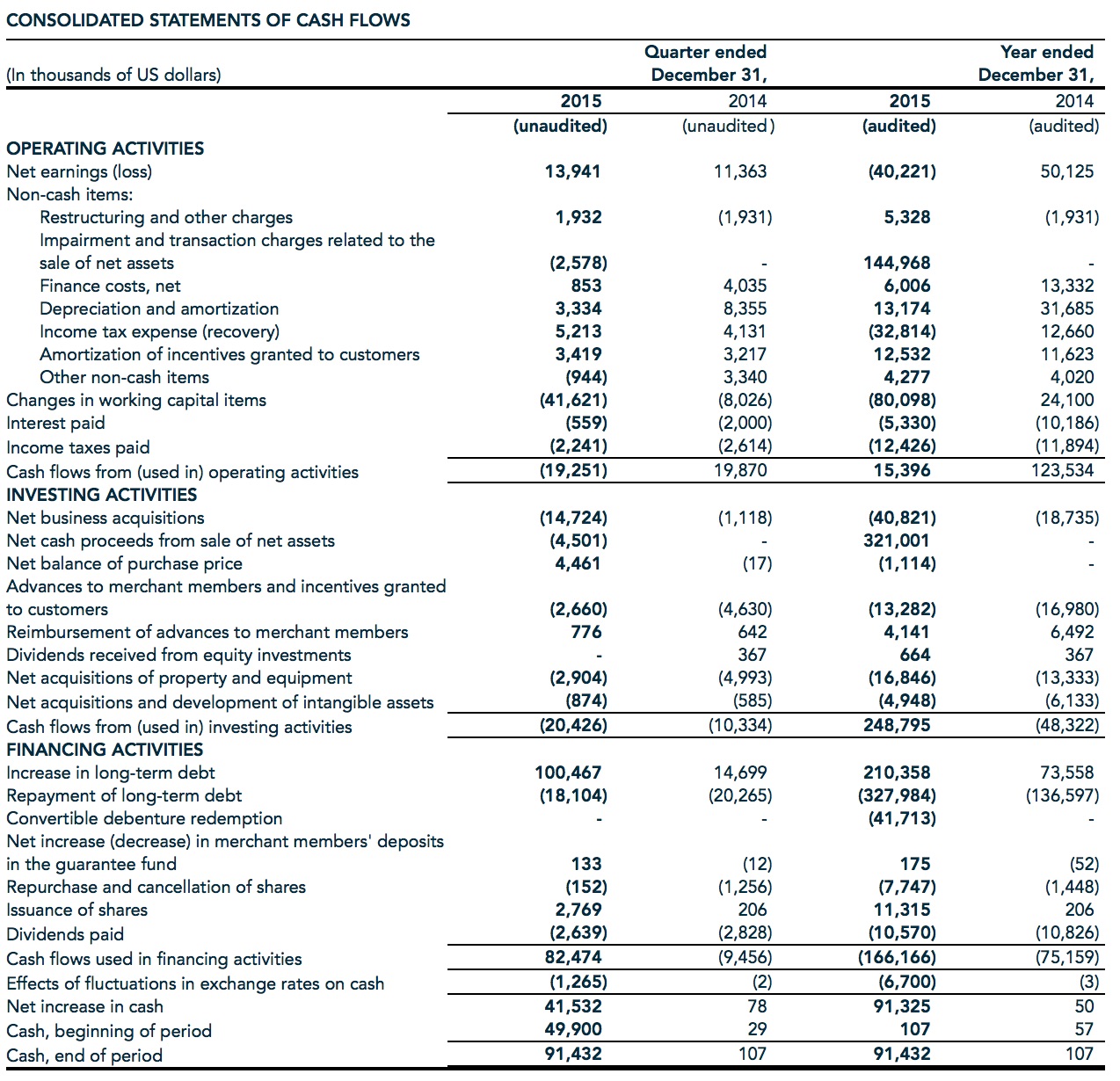 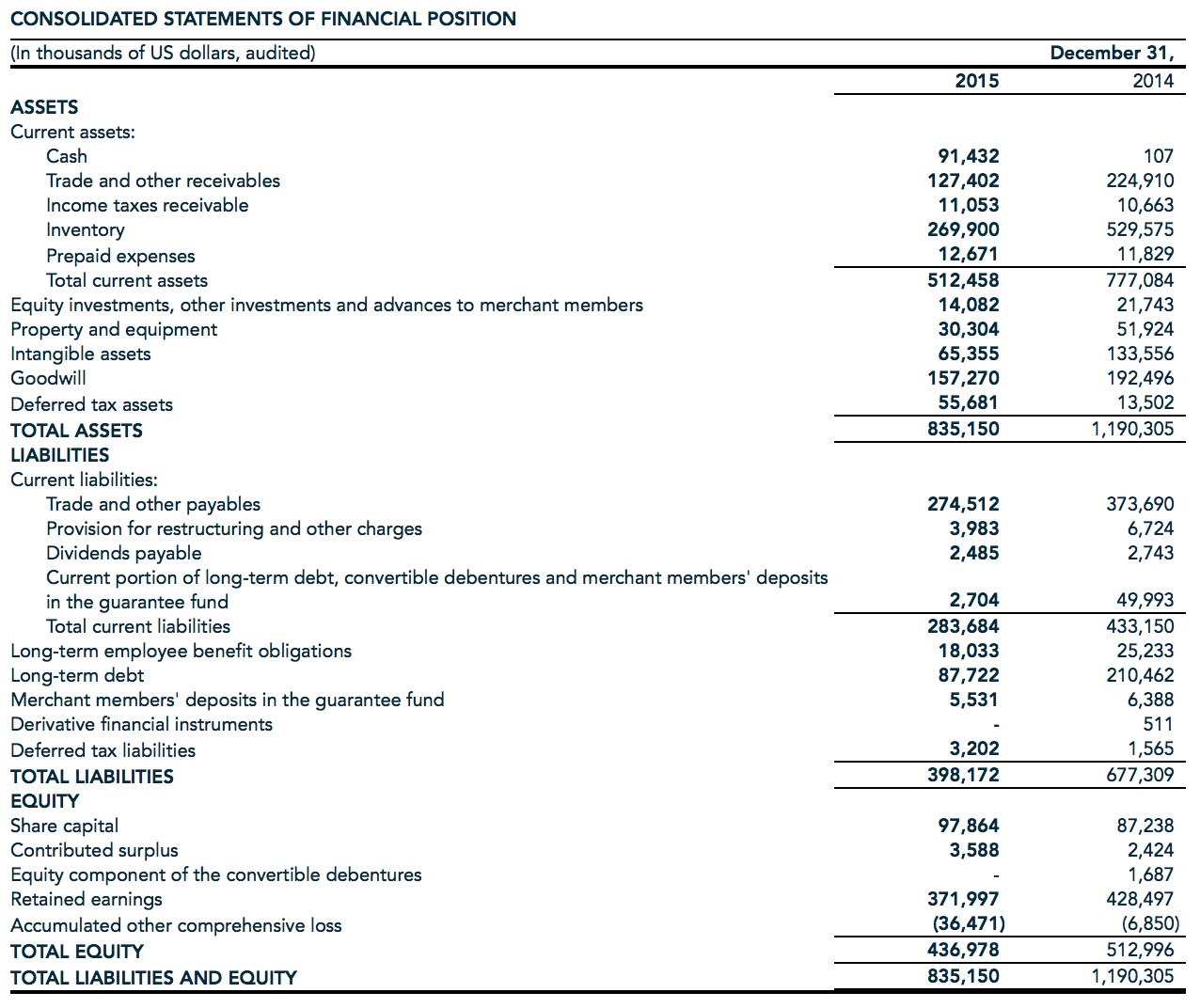