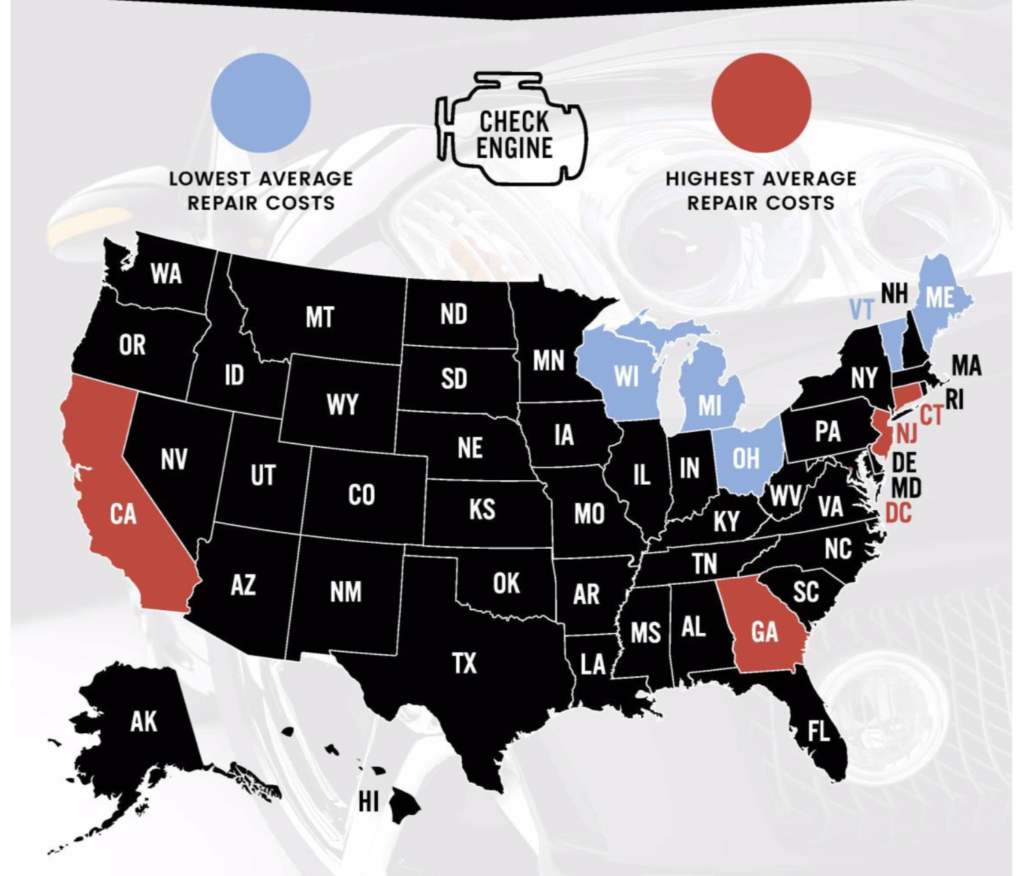 For the second consecutive year, the District of Columbia had the highest check-engine repair bills in the U.S. in 2018, according to a report from diagnostics data company CarMD Corporation.

Overall, prices in most states were up from the 2017 survey.

Rounding out the five most affordable states for car repair over the past year were Maine, Michigan, Wisconsin, and Vermont. After D.C., Connecticut, California, Georgia and New Jersey were the most expensive states for repairs. CarMD analyzed data from more than 11.4 million cars, trucks, vans, and SUVs needing repairs in 2018 to compile this ranking.

“Several factors contribute to a state’s average repair costs, including vehicle age and type, how difficult the repair is, parts required, how much time is needed to make the repair, and what the repair shop charges per hour,” said David Rich, technical director at CarMD. “To help reduce the cost of repairs and avoid unexpected car repair costs, drivers should stay up to date on scheduled maintenance, address warning lights as soon as possible and find an independent repair shop or dealership they trust.”

For the third consecutive year, Vermont vehicle owners had the lowest average labour cost ($134.53) averaging all of the labour done on varying check engine light-related car repairs, reported to CarMD. This is not surprising since the most common cause of a check engine light on Vermont cars and trucks was a loose or missing gas cap, accounting for 7.8 percent of repairs.

Drivers in Mississippi paid the most for labour ($163.97), where the most common repair was to replace ignition coils and spark plugs.

Drivers in Connecticut paid the most on average for parts ($264.60), while drivers in Michigan paid the least for parts ($201.74). The most frequently recommended repair in both states was to replace one or more oxygen sensors.

CarMD’s state ranking of repair costs was derived from analysis of 11,419,150 needed repairs identified for model year 1996 to 2018 vehicles from Jan. 1, 2018 through Dec. 31, 2018 reported to and analyzed by CarMD’s nationwide team of ASE-certified technicians.

A leading provider of automotive diagnostic data and business solutions, CarMD.com Corporation publishes this annual state-by-state ranking as part of its CarMD Vehicle Health Index to bring awareness about the importance of check engine light health in order to reduce cost of ownership and reduce emissions output for cleaner air.

The full ranking can be viewed at www.carmd.com/wp/vehicle-health-index-introduction/2019-carmd-state-index/.