Over two thirds of drivers concerned about night driving 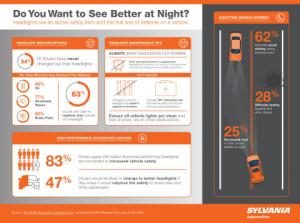 A new survey released from Sylvania Automotive Lighting, found that more than two thirds (70%) of drivers are increasingly concerned about driving at night.

Conducted online in June 2016 by KRC Research on behalf of Sylvania Automotive Lighting, the findings indicate that the majority (62%) of approximately 1,000 motorists surveyed occasionally avoid driving during evening hours due, in part, to the following concerns:

“Do you want to see better when driving at night? Most people answer yes but do not know there are choices and don’t act on it if they do know,” said Brian Noble, marketing manager at Sylvania Automotive Lighting. “Headlights are an active safety item and the first line of defense on a vehicle, especially during evening hours, when roads are dark and dangerous. If drivers cannot see objects on the road, they cannot react. Every second counts and can make all the difference. If you can see an object sooner, you can make a better decision.”

When it comes to headlight maintenance, the survey found that more than one third (34%) of drivers have never changed out their headlights. As a comparison, these motorists have replaced their vehicle’s oil (95%) and windshield wipers (87%), proving that headlights are an overlooked component during vehicle maintenance. Making matters worse, 63% of respondents admitted they would only plan to replace one burned out headlight instead of both at the same time, a common mistake among drivers on the road today.

Noble advises: “Be sure to always swap headlights out in pairs, they are on the same amount of time, and don’t wait until burn out for a replacement. Headlights dim over time, so if you can’t remember the last time they were changed, now is probably a good time to consider a replacement. This in turn will help drivers feel safer and more confident when driving at night.”

The majority (83%) of drivers agree that better down road performing headlights are definitely connected to increased vehicle safety, and 6 % admit changing out their headlights is a very important precautionary measure. Additionally, just under half (47%) of drivers would be likely to change to better headlights if they knew it would improve the safety of loved ones and other passengers, yet noticeably more would do the same for their brakes (61%) or tires (55%).