Trump tariffs would cause vehicle prices to soar, wipe out jobs: report 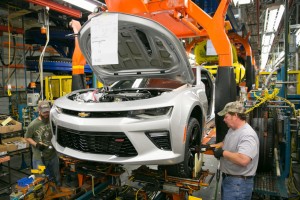 The average price of imported vehicles sold in the United States could jump by thousands of dollars if the Trump administration imposes tariffs under a worst-case scenario provided by the Center for Automotive Research.

The impact on American consumers would be substantially less if Canada and Mexico – partners with the United States under the North American Free Trade Agreement – are exempted.

A quota that limits the number of vehicle and parts imports to 80 per cent of 2017 levels would also be costly, pushing up the price by US$6,610 if all countries are included or up US$5,583 in Canada and Mexico are excluded.

The report was issued ahead of congressional hearings into the Trump administration’s threat of tariffs or quotas to protect its national security.

But the CAR study found U.S. auto production can’t quickly increase, taking at least a year to convert an under-utilized plant and on average two years to build a new assembly facility.

The U.S. economy would contract by between US$6.4 billion and US$62.2 billion, it said.

CAR estimates that American auto demand will fall by between 493,600 to two million vehicles, resulting in the loss of 82,000 to nearly 750,000 auto manufacturing jobs.

“U.S. automotive and automotive parts manufacturers would not benefit from tariff or quota protection since all vehicles produced in the United States rely on imported content and a substantial share of U.S.-produced automotive parts and components are exported for assembly in vehicles built in other countries,” it said.

Figures from the U.S. government’s International Trade Administration show more than 70 per cent of U.S. exports last year were to Canada and Mexico “so including these two trading partners in the trade action would be particularly harmful to U.S. automotive parts producers.”

Used vehicle prices would also rise as more consumers turn away from new purchases and the selection of cheaper imports would likely be reduced as manufacturers decided to no longer offer some models.

In 2017, 52 per cent of vehicles sold in the U.S. were manufactured domestically. Of the 48 per cent that were imported, with more than half assembled in Canada or Mexico containing significant U.S. content.


1 Comment » for Trump tariffs would cause vehicle prices to soar, wipe out jobs: report