Toyota To Pay Up To $3.4 Billion To Settle US Truck Lawsuit 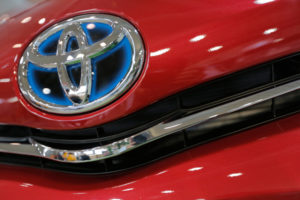 FILE – In this Aug. 2, 2013 file photo, the emblem of a Toyota car shines at Toyota Motor Corp.’s showroom Toyota Mega Web in Tokyo. Toyota remained the top-selling automaker for a second year in a row, beating U.S. rival General Motors by some 270,000 vehicles in 2013, and set an ambitious target to sell more than 10 million vehicles in 2014. That would mark a milestone as no automaker has ever topped annual worldwide sales of 10 million. (AP Photo/Itsuo Inouye, File)

Toyota will pay up to $3.4 billion to settle a class action lawsuit brought by U.S. pickup truck and SUV owners whose vehicles lacked adequate rust protection.

Court filings show that the settlement reached on October 31 covers 1.5 million vehicles, dealing a financial blow to the Japanese automaker whose trucks were subject to corrosion that could harm their structural integrity.

The settlement estimates the value of replacing the frame at roughly $15,000 per vehicle. Under the settlement, Toyota will inspect vehicles for 12 years from their initial sales or lease date to decide if the owner is eligible for a replaced frame or reimbursement.