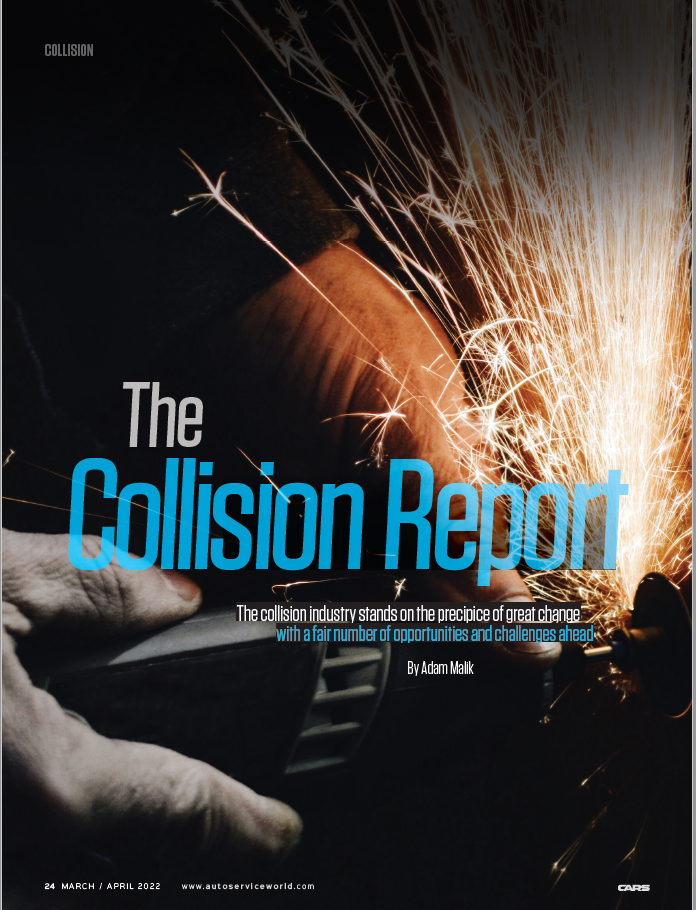 THE COLLISION INDUSTRY holds a rather unique place in the automotive aftermarket. While its mechanical repair peers likely have a few years before vehicles fully equipped with advanced driver-assistance systems or battery electric vehicles hit their bays, those in collision repair need to be up on their knowledge now.

A car fresh off the dealer’s lot today could be in the shop for repairs tomorrow. Being late to the party is not an option.

“The industry is in the middle of a technological revolution on par with some of the biggest in the world,” observed Andrew Shepherd, senior director of industry programs and executive director of I-CAR Canada at the Automotive Industries Association of Canada.

“We are at the end of the internal combustion engine era. And we can have a debate about where we are in that transition and how many years there are to go, but it’s right on the doorstep [at] the point where collision repairers are fixing new electric and battery vehicles, and they’re starting to see them on a regular basis.”

“The real prevalence of [these vehicles] is quite imminent — within a couple of years,” according to Shepherd. “That produces massive pressure on the people who are kind of on the edge — the ones that are on the edge financially, maybe age-wise, and see the required investment as just too much.”

So that could mean more mergers and acquisitions ahead in a sector where a vast majority of shops are already part of a network.

“So we’re certainly going to see a lot of churning in the numbers of shops, and with the exit of certain shops, that certainly leaves the rest of the marketplace to the investors the forward thinkers,” Shepherd said.

He estimated that 75 per cent of collision work is done by 25 per cent of shops, almost all of which are part of a network. Canada is home to one of the biggest sets of networks in the world. “The need for very sophisticated infrastructure to deal with the cars that are ‘one day off the lot’ is what really, I think, provokes the collision side into that,” Shepherd said.

In fact, he called it “critical” for shops to be part of a network these days. The scale needed for purchases, attracting talent, technical infrastructure and more is eased when part of a network. Otherwise, it’s difficult to compete.

“So I think it’s absolutely critical on the collision side. It’s going to be very difficult for small operators to continue to play in this game,” he said.

Something else to watch out for is players outside of the collision industry to make a move to invest dollars in it. There is interest.

“[That] is a very clear signal that there’s tons of money to be made in the industry,” Shepherd told CARS. “There’s very strong outside financial support for networks in particular. The auto parc is expanding. There are signs of declines in collision, but the number of vehicles is certainly increasing. I think the long-range players, including the financial people, do see a lot of money to be made in the industry. But it’s going to take a big investment at the shop level for the people to stay in it.”

“I think the long-range players, including the financial people, do see a lot of money to be made in the industry. But it’s going to take a big investment at the shop level for the people to stay in it.”

The collision industry is a bit different than three years ago. Since the onset of the COVID-19 pandemic, change has been the name of the game, from driver behaviour to vehicle usage to claims frequency to claims severity. Not to mention cost pressures and supply chain challenges that are hurting every industry from the automotive aftermarket to the grocery industry.

When COVID-19 first took hold, many people parked their vehicles. Claims frequency tumbled. Numbers eventually came up as time went on and understanding of the virus grew. According to Susanna Gotsch, senior director, industry analyst for CCC Intelligent Solution, claims in 2021 recovered throughout the year, finishing about 10 per cent higher than in 2020, which had dropped 20 per cent from 2019.

“So throughout the course of the year, we saw steady increases month over month. And as we move into 2022 expect further recovery including frequency as well,” she said during the webinar 2022 and the New Norm in the Collision Industry, hosted by the Collision Industry Electronic Commerce Association.

But it’s more or less expected that claims frequency will stay below historical levels. Though much of the country has eased pandemic-related restrictions, the way people work is changing. For some, gone are the days of commuting five days a week to the office. Hybrid work will change things. How much, though, remains to be seen, Gotsch said. For example, most collisions happen during the morning and evening rush hours.

“A good portion of employees are still working remotely at least one day per week, which leads to reduced congestion on roads. And historically, one of the primary drivers of auto claim frequency had been the same drivers on the same road at the same time, which was typically the occurrence during a.m. and p.m. rush hours,” she said. “With fewer people on the road, we’ve seen, obviously, claim frequency fall as a by-product.”

“The people who’ve decided they’re going to stay in the industry and profit from this over the next 10, 20, 30 years are going to have to deal with that,” Shepherd said.

Severity, however, has kept shops busy. Though fewer collisions were happening, the ones that did take place have generally been more severe.

“And we continue to see people driving at faster speeds than they had when they sat in that bumper-to-bumper traffic, and also many more reports of reckless driving,” Gotsch reported.

“The claims data shows we continue to see a change in the makeup of the claims characteristics as a by-product of some of that reduced congestion, specifically, more non-drivable claims and more claims flagged as total loss.”

For now, most ADAS technology is in the bumper. It will just be a matter of time until automakers better protect those sensors by redesigning vehicles around the sensors, thus reducing the cost of repair.

“The longer-term is certainly going to see fewer accidents. Whether the severity can keep up with that as a balance, I doubt it to be honest,” Shepherd said.

“And we continue to see people driving at faster speeds than they had when they sat in that bumper-to-bumper traffic, and also many more reports of reckless driving.”

Then there’s financial pressure. Repair costs have gone up, thanks to a combination of increased prices for parts due to supply chain delays and inflation overall.

“Specifically, when we look at the average aggregate price per part, this is across all part types, whether it’s an OEM part or an aftermarket part, whether it was a hood or hinge for hood or quarter panel, the average cost per part rose over 8 per cent in a single year,” Gotsch said.

That’s the biggest annual increase her company has seen since it has been collecting and reporting this type of data since 1997.

“There’s huge cost pressure on these shops. This is not a normal marketplace,” Shepherd said in an interview.

That naturally turns the conversation to insurance. Increasing repair costs means more cost to the insurer. “So the difficulty now is convincing the insurers that higher compensation is necessary,” Shepherd said.

And with the investments needed to get the tools and equipment to repair more technologically advanced vehicles plus technician training, there’s some consternation that insurers aren’t willing to pay their share to ensure shops are being compensated.

“And what will happen very quickly, and it’s happening already, is that without that compensation, the shops can’t pay the technicians. And as they drift away to other industries or technical-minded people don’t choose the collision sector, because of the pay that they’re allowed, that they can give, then very quickly, the insurers won’t have the repair capacity to support the repair of vehicles,” Shepherd warned.

Indeed, wages are expected to be the biggest cost increase in the collision industry moving forward, according to Gotsch. Part prices have stabilized — though it’s unlikely they’ll reverse — and only moderate increases are to be expected, rather than significant spikes as seen throughout 2021.

“Where most analysts are predicting industries like the auto industry, the collision repair industry, the insurance industry and many more is going to see the most pressure is going to be on wages in 2022,” she said. “So the likelihood that we will continue to see repair costs rise, perhaps not at the same rate, but continue to rise further, is something that we’re all anticipating as we look forward to 2022.”

CARS reached out to the Insurance Bureau of Canada, which represents the country’s property and casualty insurance industry to ask about investments needed in wages, training and equipment.

“Vehicle repair costs have been increasing for many years. New vehicles are built with expensive technology that is very costly to repair, even after a minor collision,” said IBC spokesperson Andrew Bartucci. “In addition, record levels of inflation, combined with supply chain disruptions and parts shortages, is increasing auto claims costs.”

He also acknowledged driving behaviour is playing a role. “As driving habits return to normal levels across Canada, the cost to service auto claims is also increasing due to the price (and shortage of parts) for both new and used vehicles,” Bartucci told CARS via e-mail.

“Vehicle repair costs have been increasing for many years. New vehicles are built with expensive technology that is very costly to repair, even after a minor collision.”

When asked to outline the biggest challenge and the biggest opportunity for the collision sector, Shepherd said they’re one and the same: Change.

“If you were around in 1900 and saw the first Model T driving down the road, most of us would have said, ‘No way, man. This is just a fad. My horse is [sacred]; I’m not going to worry about it.’ If you had been ready for the internet in around 1995, would you have been able to forecast the change in your world in that time? So the changes are getting faster,” he said.

“And there’s definitely going to be a swath of the industry either unprepared or unready to make those really big shifts. And that means that those people will drop out. To be honest, the techs who have worked there, many of them will be free for the other shops and the rest of the shops are going to pick up the slack and collect in volume what they may be losing in that accident frequency. So the biggest challenge is technological change. And it is the biggest opportunity, too.”

This article originally appeared in the March/April issue of CARS.