What slow down in car sales? 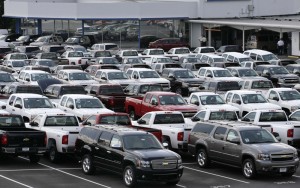 The experts have been wrong so far. At least as far as Canada is concerned, anyway.

Both DesRosiers Automotive Consultants and Scotiabank Economics predicted a softer year for vehicles sales in Canada compared to last year. Nothing major, but a slight drop off from 2017’s record-breaking year of more than 2 million units sold.

January went above expectations, but both groups maintained their positions.

February’s numbers are in and Canadian consumers continue to “defy expectations” as record fell again for the month. For the year, sales are up 3.8 per cent compared to 2017.

According to DesRosiers, February was up 2 per cent year-over-year with 125,530 vehicles sold. The previous record of just over 123,000 units for the month was set just last year.

The consulting group also noted that the light truck segment continues to set itself even further apart from passenger cars, with the former up 5.6 per cent in sales and the latter down 6 per cent.

Fiat Chrysler sold the most vehicles but was down 1.5 per cent compared to 2017. Ford was just behind but also saw a 2.4 per cent decrease. General Motors was up 8.8 per cent and remains third year-to-date, behind Ford and leader FCA.

South of the border, sales tailed off in February. Experts are blaming automakers for easing up on discounts.

New car and truck sales were down 2 per cent compared to February 2017 to a total of 1.3 million units. Only Toyota, Subaru and Volkswagen reported sales gains over last February amongst major car makers.

The Associated Press reported that Ford’s U.S. sales chief Mark LaNeve said automakers spent an average of $65 less per vehicle on incentives in February compared to the same month last year. Compare that to 2017 when incentive spending often climbed $300 or $400 per month.

He held out hope that discounts could grow in the coming spring and summer months when more people are shopping for vehicles, pockets filled with money from tax returns. But based on the first two months of this year, The Associated Press reported, he expects automakers to remain fairly disciplined. In the past, heavy discounting has led to overproduction and steep declines in automakers’ profits.