USMCA may have something to do with precipitous drop in sales, say analysts at DesRosiers Automotive Consultants. 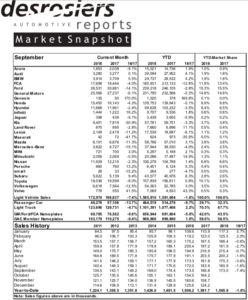 To view chart at full size, see below.

With a total of 172,974 new vehicles sold, September brought about a 7.4% year-over-year sales decrease for the country.

According to DesRosiers Automotive Consultants, this represents a close to 14,000-unit deficit when looking at September 2017 figures, and has made 2018 the lowest sales for the month of September since 2014.

To put this further into perspective, this is the largest year-over-year sales decrease Canada has experienced since August 2009 when sales dropped 7.9%.

One of the factors that could have contributed towards this drop-off in new vehicle sales was the uncertainty surrounding the recently concluded trade negotiations between Canada and the U.S. The United States-Mexico-Canada Agreement (USMCA), formerly the NAFTA, was formally agreed to yesterday. However, the long period leading up to this conclusion included threats of an auto tariff that could have potentially resulted in the loss of many auto industry related jobs for Canadians. With the signing of the deal and the threat of tariffs to the Canadian auto industry withdrawn for now, the consumer confidence issue may be alleviated for the final three months of the year.

Looking at year-over-year figures, large decreases were recorded among the five largest brands by volume for the month with Ford (-14.1%), General Motors (-6.1%), Toyota (-8.0%), FCA (-4.0%) and Honda (-4.3%) recording decreases. The overall market is sure to reflect a decrease given the performance of these higher volume brands.

New-car Sales South of the Border

The seasonally adjusted average selling rate in the United States appears to be holding its own at around 17 million vehicles.

According to Charlie Chesbrough, an analyst with Cox Automotive, “There is a little bit of a fire under car buyers’ feet at this point to get into the market before those monthly payments get out of range.”

General Motors, which no longer reports monthly sales in the United States, reported third-quarter sales of 694,638 vehicles, down 11.1 percent from a year earlier.

The top sellers in the U.S. for September were: 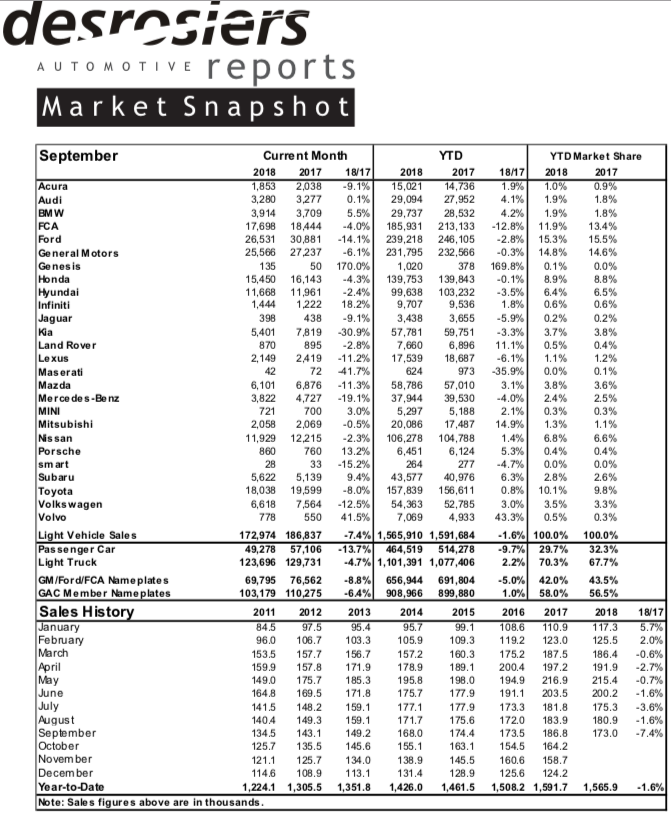