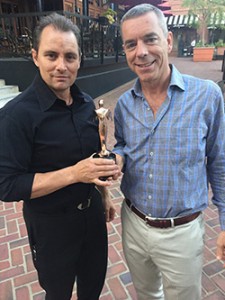 SEMA has won a Bronze Telly Award in the Film/Video category for the “2015 SEMA Battle of the Builders” TV program that premiered on Velocity February 1.

The one-hour special, hosted by Adrienne Janic and Chris Jacobs, featured behind-the-scenes footage and in-depth interviews with leading car designers and builders as they prepared to debut their newest creations at the 2015 SEMA Show in Las Vegas.

The winner of the competition was revealed during SEMA Ignited—a consumer-facing event held at the conclusion of the final day of the Show.

“It’s an honor to be recognized for this achievement in only our second year of producing the ‘SEMA Battle of the Builders’ special for Velocity,” said Chris Kersting, SEMA president and CEO. “We look forward to delivering more exciting content featuring specialty-automotive lifestyles to the public for many years to come.”