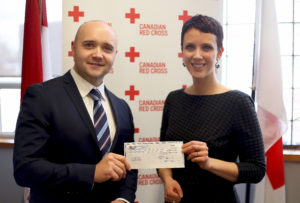 Chemicals manufacturer and distributor RSC of Canada recently made a donation to the Canadian Red Cross Alberta Fires Appeal.

“The donation was a result of a nationwide promotion RSC introduced in the Summer of 2016 and was comprised of contributions from RSC’s customers across Canada,” the company said in a news release.

“We are thrilled by the results of this promotion and are deeply inspired by the support our customers demonstrated for this cause,” said Alex Okounev, director of sales and marketing at RSC. “Alberta Fires touched lives of many Canadians within and outside of the Fort McMurray community, including many of our partners, and we are grateful for the opportunity to contribute, in our small way, to the rebuilding efforts of one of nation’s most hardworking regions.”