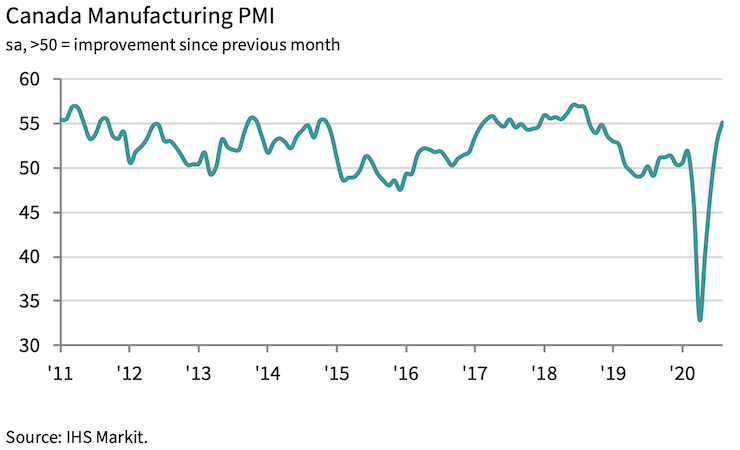 The latest data in the IHS Markit Canada Manufacturing Purchasing Managers’ Index pointed to another positive month overall for the Canadian manufacturing industry as it extended its recovery.

New orders and output both increased solidly in August, with firms linking growth to greater client demand. Employment also saw another upturn which manufacturers attributed to demand for staff amid signs of emerging capacity pressures. Meanwhile, input price inflation accelerated at the fastest pace since January 2019.

The headline seasonally adjusted PMI registered 55.1 in August, up from 52.9 in July, to signal the sharpest improvement in business conditions since August 2018.

“Latest data highlighted a strong upturn in the Canadian manufacturing industry, continuing the recovery from the severe second quarter downturn,” said Shreeya Patel, an economist at IHS Markit. “Production and order book volumes both expanded at the fastest pace in two years, driven by the reopening of client businesses and improvements in customer demand.”

She said rising workloads and signs of capacity pressures are good news for jobs.

“Employment increased at the fastest rate since the start of 2019,” she said. “That said, it was not all positive in August, delivery times lengthened at another marked rate amid ongoing COVID-19 disruption, while there were signs of building inflationary pressures.”

In line with higher production, staffing levels continued to rise in the Canadian manufacturing industry. Moreover, the latest expansion in payroll numbers was the fastest since January 2019. Respondents noted efforts to alleviate capacity constraints after a rebound in new orders.

Backlogs of work increased for the first time since February 2019. Panellists linked the rise in unfinished work to growing demand and insufficient capacity for completing outstanding business.

Meanwhile, intense supply chain pressures continued in August, as signalled by a further lengthening of delivery times for purchased items. Panellists noted transportation issues as a result of COVID-19 restrictions.

Despite two consecutive months of rising new orders, market uncertainty continued to weigh on stocks of purchases. That said, the rate of contraction was only modest. Stocks of finished goods were also depleted, and to a marked degree. Capacity pressures reportedly forced firms to fulfil orders through the use of inventories.

Input cost inflation accelerated to its fastest for 19 months. Higher purchasing prices were attributed to increased raw material costs. Canadian manufacturers passed on greater cost burdens to clients through higher factory gate charges. The solid rise in selling prices was the third in the past four months, and the fastest since April 2019.

Looking ahead, business sentiment remained positive among Canadian manufacturers, as firms continue to foresee a rise in output over the coming year. That said, the possible continuation of the COVID-19 pandemic weighed slightly on confidence as the degree of positive sentiment was below the series average in August.