OCOT looks for input on developing its next five-year-plan 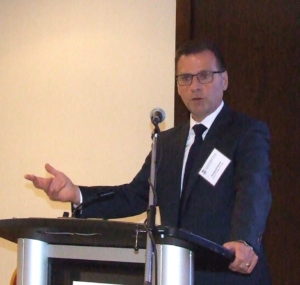 George Gritziotis, CEO and registrar of the Ontario College of Trades.

Clarifying the Ontario College of Trades’ value proposition will be “front and center” in the ongoing consultation about how OCOT should position itself over the next five years, the college’s CEO and registrar says.

Speaking at the college’s annual members meeting in Toronto on Tuesday, George Gritziotis admitted that even after eight years of operation, the Ontario College of Trades (OCOT) has trouble proving its value to members.

“The value proposition. ‘What do I get for $120 a year?’ I can’t answer that, and it bugs me that I can’t answer it,” he said. “I need everybody’s help to help me figure it out, and we’re throwing out some ideas. But it’s our goal to be able to get our members to understand what they’re getting from the college.”

He said it can be difficult to measure progress as the college strives to meet its mandate to regulate and promote skilled trades. Keeping unregulated, uncertified workers out of the marketplace is especially challenging, and it is a source of frequent complaints from employers who are following the rules.

Indeed, one employer in the room used the question period following the meeting to complain about having to compete with uncertified tradespeople.

There are well over 200,000 workplaces that employ skilled trades, and many more work sites where tradespeople operate. Yet the college has just 45 enforcement officers to deal with consumer and industry complaints.

“That’s a daunting task,” Gritziotis said. “Having just 45 officers is not going to be able to get us to the Promised Land on this. We have to find ways of doing it.”

He sees his enforcement officers as working ‘on a continuum’ to enforce the Ontario College of Trades and Apprenticeship Act, 2009.

“Part of their job is to create awareness, educate, train, warn, and – if someone is egregiously avoiding the Act – then to penalize and fine,” he said.

“If you have an unregistered worker who’s looking to put food on his table, a conversation to get them registered into an apprenticeship would be a victorious visit for an officer, especially in a sector where we’re faced with retirements and labour shortages,” he said. “We wouldn’t be doing the market or any industry a favour by simply saying, ‘You’re unregistered, here’s a ticket.’ We’re going to have a conversation first, and we’re going to attempt to get them registered into an apprenticeship.”

Gritziotis told about 150 ‘stakeholders’ at the members meeting that just aligning the various views of what the college should be is no easy task.

“The college marketplace is extremely diverse in terms of needs, expectations, and relationships,” he said. “In fact, the College of Trades is unlike any other regulatory body in the province, or quite frankly across Canada. Possibly around the world.”

It regulates 156 trades, 23 of them compulsory (you must be an OCOT member in order to work in that trade), and some 238,000 members across the province.

“The only way I believe we can get to where we want to be is by engaging with our stakeholders in an open and transparent way,” he said. “We won’t progress if we’re not willing to talk to one another.”

That will be the task over the next few months, as the college prepares to develop its next five-year plan. He said the planning process will begin in earnest in the fall.

During the meeting OCOT chairman Don Gosen agreed it was time for the college to “recalibrate” after eight years of operation.

A financial report was also delivered at the meeting.

It was reported that the college’s auditors, Deloitte, issued an unqualified audit. (“That’s a good thing,” pointed out Howard Deane, chairman of the finances and audit committee.)

Revenues in 2017 totalled $31 million – $24.7 million from membership fees. Revenue over expenses totalled $5.5 million, and the college ended the year in a favorable financial position with net assets of just over $18 million.