Lethbridge apprentices named as recipients of first-ever Brian Kaltenbruner Memorial Tool Award, designed to help the next generation of technicians. 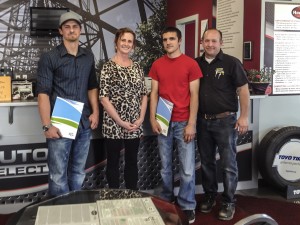 Alberta apprentices Abe Banman and Daniel Henrie are the inaugural recipients of the Brian Kaltenbruner Memorial Tool Award – established to help apprentices prepare for a career in the repair and service industry.

The apprentices – both students at Lethbridge College – received their prizes earlier this month at a special ceremony at Harold’s Auto Service in Lethbridge, Alta.

“Investment in good quality tools is a huge stumbling block to many students,” said Beverly. “I’m excited about the Brian Kaltenbruner Memorial Tool Award. It’s my hope that we can plant seeds of possibility into the minds of business owners across the country to support the next generation of technicians.” 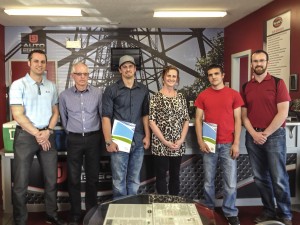 The award is funded by a personal donation from Kaltenbruner herself each year ($2,500) and a corporate donation from Harold’s Automotive ($1,000). Additional annual support from Snap-on Industrial ($500) and Silver Auto of Lethbridge ($500) are being invested so the fund will one day be self-sustaining.

Recipients are chosen by instructors, based on their demonstrated desire for excellence and commitment to the industry.

“We hope that auto service providers across the country will realize the value of investing in the best and brightest students,” she said. “It’s vitally important for auto service providers to play a major part in supporting and growing their own labour pool talent, rather than simply lamenting the lack of available qualified technicians in Canada.”

She encouraged the first recipients of the award to learn from Brian’s example of leadership and determination.

“Be strong and personally resilient,” she said. “Never allow anyone or anything to diminish your dreams or compromise your standards. Allow your personal and business ethics to carry you to unexpected success in your career and your life.”

In 2006, after having being part of Harold’s Auto since 1994, Brian and Beverly bought the business from Brian’s parents, Harold and Linda Kaltenbruner in 2006. Brian’s life was cut short in a motorcycle accident in June 2015.

Brian Kaltenbruner was well respected for his business acumen and commitment both to the community as a whole and the automotive industry. According to Beverly, he was a singularly unique and determined individual who not only had dreams, but the strength of character to turn those dreams to reality.