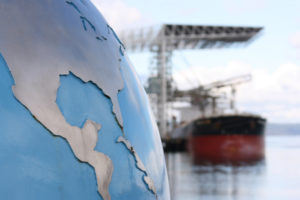 Sparks flew around the world after the U.S. President Donald Trump’s administration announced it would launch an investigation into whether tariffs are needed on imports of automotive parts and vehicles into the country.

From the European Union to Japan to China, all condemned the move that saw Trump invoke a provision that authorizes him to restrict imports and impose tariffs on the basis of national security.

Canadian Prime Minister Justin Trudeau said the move would ultimately hurt the U.S., adding that he plans to have a conversation with Trump to explain the “incredibly negative effect” of slapping a 25 per cent tariff on vehicle imports.

This is believed to be the latest move related to talks about the North American Free Trade Agreement.

“We know everything is tied to the ongoing negotiations with NAFTA,” Trudeau told reporters in La Malbaie, Que.

“It’s clear we don’t take anything lightly but it’s certain that to try and understand what the links are between the national security of the U.S. and cars potentially made in Ontario, it’s starting to become less and less pertinent or justified in any kind of rigorous or intellectually logical way.”

Automotive parts cross the border upwards of six times before being assembled in vehicles, so tariffs would hurt the auto industry.

“MEMA is disappointed that the Trump administration is investigating the imposition of 232 tariffs on motor vehicle parts and motor vehicles, as these tariffs would adversely impact the success and growth of American manufacturing businesses,” the group said in a statement, noting that a competitive marketplace is necessary for consumers in order to maintain their vehicles.

The association wants the Trump “administration to reconsider this action and pursue alternative ways to forge more positive trade relationships with our trade partners while allowing American businesses to operate freely in the global marketplace.”

The tariff threat is ‘‘perplexing” because it would make cars more expensive in the United States if imposed, David Adams told The Canadian Press.

“The prospect of a tariff on imported vehicles is obviously disconcerting and I would think particularly so for American consumers who would end up paying more for their vehicles,” said the president of Global Automakers of Canada, which represents Japanese car manufacturers Honda and Toyota.

The severity and range of the tariffs will determine how much hard is caused to Canada, Adams said.

“Maybe other countries were in mind when the president was contemplating that but the reality is the two largest importers into the United States are Canada and Mexico,” he said.

In Japan – which accounts for about 40 per cent of U.S. vehicle imports – Hiroshige Seko, the country’s minister of Economy, Trade and Industry, said it will continue to remind American officials that any trade measures must conform to the rules of the World Trade Organization.

“It would be an extremely far-reaching trade sanction that would put the global market into turmoil,” if such action is taken, Seko said. “We are extremely concerned.”

Germany’s association of industry groups said auto tariffs would be a “provocation” and “another nasty blow to our economic relations,” with the United States.