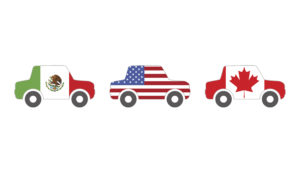 In a pair of dramatic moves, the Trump administration has signalled a growing desire to secure new trade deals, softening one key demand in the NAFTA negotiations, then expressing an interest in re-joining the Trans-Pacific Partnership.

The twin developments are a departure from the combative posture that had stoked U.S. tensions with Canada, Mexico, the European Union, Japan and even with its own struggling farmers, straining under threats of cancelled deals, tariffs, and tit-for-tat trade wars.

The development most immediately affecting Canada transpired at the NAFTA negotiating table where, sources say, the U.S. has shaved 10 percentage points off its demand on automobile content.

After spending months demanding a big increase in the amount of content cars must include from North America to avoid a tariff, in addition to insisting that half of every car comprise U.S. parts, it has now softened both proposals.

It recently dropped the American-made requirement, and then came news Thursday that it agreed to a more modest change on the North American requirement, with its demand for 85 per cent North American parts scaled down to 75 per cent, in addition to helping automakers meet the new threshold by offering credits for spending on worker salaries and research.

“We’re getting pretty close to a deal (on NAFTA),” Trump said at the White House.

That suggests the deadline threat of steel and aluminum tariffs against Canada and Mexico without a deal by May 1 may be off the table. Trump even professed to being fine with a delay, because he said companies will build more plants in the U.S. if there’s uncertainty in trade with Mexico: “I told the Mexicans we can negotiate forever.”

But that wasn’t the biggest bombshell the White House dropped Thursday.

The more far-reaching, long-term story involves news that Trump wants to explore rejoining the Trans-Pacific Partnership. That deal was originally viewed as a geopolitical tool, with expanded American commercial links in China’s backyard, and new trade standards for the Chinese to adhere to in any eventual free-trade deal.

Trump railed against the deal as a candidate, then pulled out upon entering office, while Canada and other countries signed on.

He now appears to be reconsidering his stance, as the U.S. finds itself enmeshed in multi-front trade hostilities – not only with China but with its own allies – and threats of new tariffs clobbering already struggling American farms.

The president uncorked the news in a meeting with farm-state senators.

Several senators confirmed that Trump instructed his advisers to explore U.S. entry into the TPP. South Dakota Sen. John Thune described Trump as “bullish” on the idea. Nebraska Sen. Ben Sasse said the president mentioned it several times, telling Robert Lighthizer and Larry Kudlow to explore U.S. entry, even looking Kudlow in the eye and saying, “Go get it done.”

Sasse welcomed the news as a smarter way for the U.S. to be fighting unfair Chinese trade practices, like theft of intellectual property and over-production of steel.

“The best thing the United States can do to push back against Chinese cheating now is to lead the other eleven Pacific nations that believe in free trade and the rule of law,” Sasse said in a statement.

“It is good news that today the president directed … Kudlow and … Lighthizer to negotiate U.S. entry into TPP.”

So how does the NAFTA process fit in?

One well-connected stakeholder has been predicting for weeks that these deals might ultimately coalesce into one; he said the auto rules now being negotiated under NAFTA could become the key U.S. condition for re-entering TPP.

Volpe’s association dislikes the TPP, because of the main American concession in the original negotiation: the Obama administration agreed to lower barriers to parts from Japan’s low-cost suppliers, Thailand and Vietnam.

Volpe had been predicting that in reply to Abe’s demand for relief from tariffs, a logical response from Trump would be to request U.S. entry into TPP – under more favourable, NAFTA-friendly auto rules.

That scenario now appears to be one step closer to reality.

“(U.S. entry into TPP) could be the price (of dropping steel tariffs),” Volpe said. “If China is the common competitor … the Japanese have to ask themselves if they’re better off.”

Kudlow, the new pro-trade White House economic adviser, has been talking about organizing a “trade coalition of the willing” to organize American allies against certain Chinese practices.

He told Fox News last weekend that Canada, Japan, Australia, and Europe would be part of this so-called coalition, but did not offer specifics about what policies they might pursue.