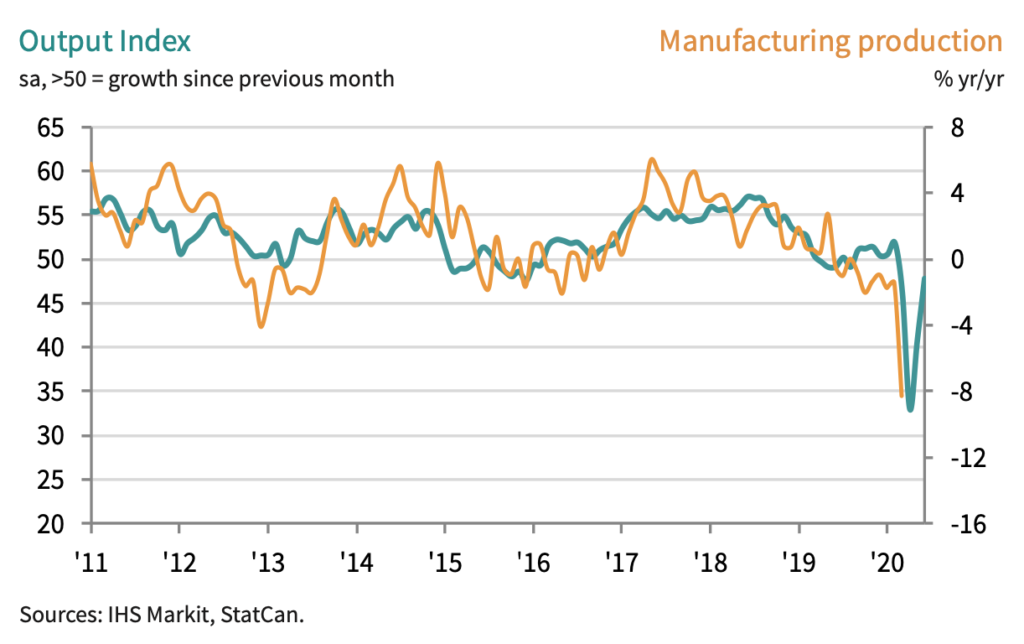 Business expectations continue to rise from the lows recorded in April 2020.

The latest data in IHS Markit Canada’s Manufacturing Purchasing Managers’ Index provided signs of a turnaround in momentum across the Canadian manufacturing sector.

The seasonally adjusted PMI registered 47.8 in June, up from 40.6 in May, and well above the survey-record low seen during April (33.0). That said, the latest reading remained below the neutral 50.0 threshold.

Production volumes dropped to the weakest extent since the downturn began in March.

Around 30% of the survey panel reported a fall in output during June, while approximately 27% signalled an expansion. Manufacturers reporting a decline in production overwhelmingly attributed it to weaker underlying demand conditions.

Where growth was recorded, panel members mostly cited a phased restart of factory operations and reopening among clients after stoppages due to the COVID-19 pandemic.

Mirroring the trend for output, the latest data signalled the slowest fall in new work since the start of the downturn in March. Manufacturers reporting lower sales mostly commented on cautious spending by clients and worsening global economic conditions in the wake of the COVID-19 pandemic. Export sales continued to decrease at a faster pace than total new orders in June.

A lack of pressure on business capacity and concerns about the outlook for customer demand continued to hold back staff hiring in June. Latest data indicated a fall in employment for the fourth month running, but the rate of decline was the least marked over this period.

Some manufacturers noted that they had begun to add to their payrolls in response to more stable demand conditions, but this was more than offset by those signalling continued job cuts in June.

Looking ahead, around 42% of the survey panel anticipate a rise in production volumes over the next 12 months, while 16% forecast a reduction. As a result, the index measuring business expectations for the year ahead remained in positive territory, and reached its highest level since February. Manufacturers typically commented on an expected boost to client demand and production schedules associated with a gradual easing of COVID-19 measures.