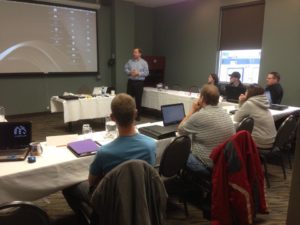 Murray Voth takes a class through the fundamentals of business management.

“I specialize in helping owners of automotive service and repair shops run their businesses efficiently and maximize profits,” he said.

Voth spent 25 years operating PetroCanada and Shell service stations with repair bays. A big believer in professional development, he was a client of consultant Bob O’Connor (RLO Training) and, later, Dave Meunier (Total Automotive Consulting and Training). He had enough success that was able to offer his own dealer development classes before joining TACT as a full-time trainer and consultant, delivering the ProShop program.

Now, launching out on his own, Voth says he has six groups (with a maximum of 10 members) up and running, two in Ontario, two in British Columbia, and one each in Saskatchewan and Alberta.

“I seem to be able to find the roadblocks to implementation,” he said. “It’s one thing to teach and pass on information. It’s another to coach. But when owners hit a roadblock that prevents them from making necessary changes, you have to ask the right questions that get them past the obstacle.”