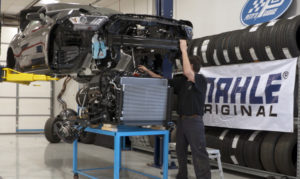 Mahle Aftermarket announced that it has begun working on the grand prize it will give away at AAPEX in the fall.

As part of the Mahle “Drive with the Original” Technician Promotion, a custom, twin-turbo Mahle Ford Mustang is being built at Petty’s Garage in Randleman, N.C. It will have a rebuilt engine with upwards of 1,000 horsepower, potentially. Mahle will create custom pistons for the engine due to the high boost pressure from the twin turbo engines.

“The Mahle Ford Mustang will be a real showcase for Mahle Original gaskets and other Mahle parts,” said Jon Douglas, General Manager of the company’s North American aftermarket division.

The Mustang will have a custom blue paint scheme to the exterior and specially modified suspension, spoiler and interior. Upgraded, high-performance wheels and tires will round out the package.

The promotion runs to October 1, 2017. Four finalists will then be randomly selected for an all-expense paid trip for two to AAPEX in Las Vegas, from Oct. 31 to Nov. 2. The finalists will receive a key fob, with one of them being able to start the Mustang.

An additional 2,400 instant prizes will also be awarded.

Complete information about the “Drive with the Original” promotion, including official rules, terms and conditions, can be found at www.drivewiththeoriginal.com.