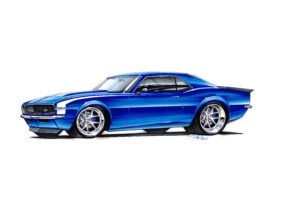 After the success of the 2017 Drive With the Original technician promotion, Mahle Aftermarket it bringing it back for 2018.

This time, the team at Petty’s Garage will be building a “Resto-mod” 1968 Chevy Camaro as the grand prize. Like last time, it will be awarded at AAPEX in Las Vegas.

The nearly year-long promotion is already underway and runs until Oct. 1, 2018. Four finalists will be randomly selected for a trip for two to the biggest aftermarket show of the year. They will each pick a key and one will unlock the doors to the grand prize.

The contest, however, is only open to U.S. technicians.