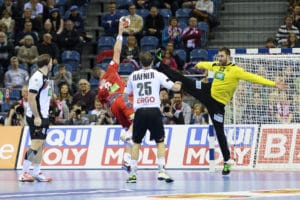 Bjarte Mryhol (NOR) throws a ball to Andreas Wolff (GER) during the 2016 European Men’s Handball Championship in Krakow, Poland. Liqui Moly will sponsor the World Championship in 2019.

In an effort to further enhance its profile and brand awareness, Liqui Moly announced that it will be the official sponsor of the 2019 World Handball Championship in Denmark and Germany.

The tournament runs from January 10-27. It’s a continuation of it sport sponsorship endeavours, said Peter Baumann, Marketing Director at the German oil and additive company.

The championship will see 96 games played, with the company’s logo visible behind the goal and on the LED hoardings

“This not only brings our brand closer to the hundreds of thousands of spectators in person, but also to the screens of many millions of sports fans,” Baumann said.

“We also want to increase our brand awareness outside of motorsports and the World Handball Championship is a great opportunity to do just that,” Baumann said. “We are helped by the international focus of a world championship and the associated global media presence.”