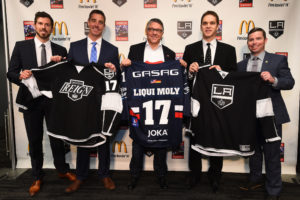 They won’t play left wing or be between the pipes to help push the Los Angeles Kings into playoffs, but Liqui Moly will be sponsoring the squad in a new three-year deal.

The advertising partnership with the National Hockey League club means Liqui Moly is the first German oil brand to be part of a professional sports team in the U.S., according to Peter Baumann, Liqui Moly’s marketing director.

For the company, the deal made sense on a number of levels. Liqui Moly is looking to expand its presence in North America, where it sees plenty of growth opportunities. And a lot of that is in the golden state. “This is why we’re launching this advertising campaign with our biggest budget yet in North America,” said Baumann.

The decision to do a deal with the Kings was strategic “because a lot of our customers are based in the LA area; the level of spending power and the frequency of German cars are also particular high in California.”

Celebrating its 60th anniversary, Liqui Moly is hoping to carry over its success in Germany and gain footing in the North American market, all part of a “long-term goal” the company is pursuing in other corners of the world.

The recent success of the Kings also helped both sides come together. The team hoisted the Stanley Cup in 2012 and 2014. “All this makes the Kings a highly attractive advertising partner,” Baumann added.

Fans will see the Liqui Moly name emblazoned on the rink boards at the Staples Center, the Kings’ home arena. The deal also includes board and on-ice advertising with the team’s American Hockey League affiliate, the Ontario Reign.

“We’re seeing fast-paced growth in sales in North America so the aim of this advertising campaign is to further stimulate this development,” Baumann said.