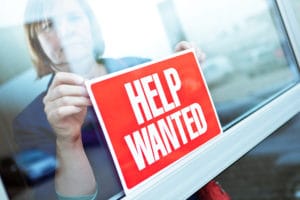 Finding workers has been a challenge for many industries and those challenges are expected to remain, according to a recent study.

Business Development Bank, which works with entrepreneurs of small and medium-sized businesses, expects there to be a shortage for at least the next decade.

The Canadian Federation of Independent Business also found labour issues hitting the country hard in the third quarter of 2018. In its latest Help Wanted report, the group said the national job vacancy rate hit 3.3 per cent, higher than records set during the financial crisis a decade ago.

Two in five respondents to  the BDC survey said that they’re struggling to find new employees with no relief in sight. This has a direct result to growth as the survey found that those affected by shortages are 65 per cent more likely to generate low sales.

“Labour shortages are affecting growth for many Canadian businesses, and this has an impact on Canada’s competitiveness,” says Pierre Cléroux, vice president, research and chief economist at BDC. “Businesses are being forced to refuse orders or delay deliveries. To help deal with the impact, entrepreneurs should think about hiring from under-represented segments of the population, such as younger or less-qualified workers, retired workers or newcomers to Canada.”

In total, the CFIB, which represents 110,000 members in small and medium-sized businesses, said there have been 430,000 unfilled jobs in the private sector for four months. BDC found the situation worst in Atlantic Canada, British Columbia and Ontario, while the CFIB reported Quebec as being the hardest hit, followed by B.C. and Ontario. Manufacturing, retail, professional services and construction were noted by both groups as industries struggling to fill positions.

“To help deal with the impact, entrepreneurs should think about hiring from under-represented segments of the population, such as younger or less-qualified workers, retired workers or newcomers to Canada.”

Nearly 60 per cent told BDC that existing staff were working more, and nearly half (47 per cent) saying they had to increase wages. The CFIB found that its members would raise wages by 2.6 per cent as a result, compared to an average 1.7 per cent increase planned by businesses without any job openings.

Business owners are finding themselves working the floor more often than they want to – that means less time spent working on developing and growing the business, said BDC, which surveyed more than 1,200 entrepreneurs for its study.

The bank offered the following suggestions to help mitigate the effects of labour shortages:


1 Comment » for Labour shortages to stick around, says study