Kitchener shop is Ontario Autopro of the Year 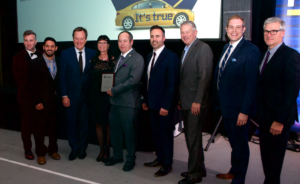 Jerry Zister’s Autopro in Kitchener has been named the top Ontario shop in NAPA’s banner program.

Zister’s earned 199 points out of a possible 200 to win the Ontario Autopro of the Year award.

The announcement was made this weekend at the banner’s national convention held in Collingwood, Ont.

“This is a dream come true,” co-owner Janice Zister enthused before a crowd of fellow Autopro members. “I feel honoured, proud, and excited. All of our hard work has paid off!”

She said the shop, which has been an Autopro member for five years, has been working very hard on delivering a consistent level of service.

“It’s all about improving the customer experience. That’s all we’ve been working on for the last two years,” she said. “I can’t think of a better way to celebrate our 50 years in business than by being named the Ontario Autopro of the year.” 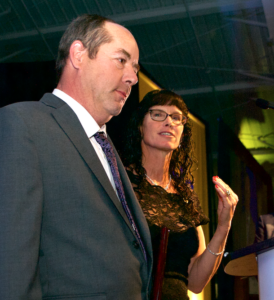 Jerry and Janice Zister, owners of Zister’s Autopro in Kitchener, Ont. address fellow Autopro members at the banner’s convention in Collingwood, Ont. on the weekend.

Jerry Zister, her husband and co-owner of the four-bay shop, echoed her comments.

“Our team has worked so hard and it is just an amazing thing to be part of the Autopro family and be at this level after five years,” he said. “This is absolutely incredible. It’s such an honour.”

Martyn Johns, regional director for NAPA Autopro in the Ontario and Atlantic regions, was instrumental in starting and administering the award.

“Over the last three years, I’ve seen some exceptional commitment to achieving this award,” he told the crowd. “Some shops have made multiple-year commitments to improving their businesses on both the management side and the marketing side to make sure that every customer that comes through their doors is treated the same and given the same high-value of service. I believe there are over a dozen shops in this room that deserve this award. Unfortunately we can only give it to one.”

Runners up in the annual award race were M&R Autopro in Trenton, Ont., owned by Frank Meiboom; and Erskine’s Autopro in Orangeville, Ont.,owned by Michael Hinbest.


2 Comments » for Kitchener shop is Ontario Autopro of the Year