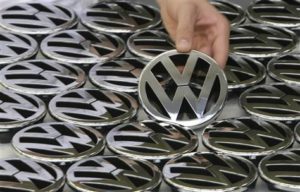 Volkswagen has negotiated a concrete draft of a criminal and civil settlement worth $4.3 billion with the U.S. Justice Department and said the impact of the accord on its 2016 financial results cannot yet be defined.

Volkswagen said final conclusion of the settlement is still subject to approval by the carmaker’s management and supervisory boards.

The settlement includes a guilty plea by the German company regarding certain U.S. criminal law provisions and a statement of facts on the basis of which the fines have to be made, VW said.

The deal comes as the automaker seeks to move past its emissions cheating scandal.

Analysts welcomed that a settlement looked set to be reached before President-elect Donald Trump takes office on Jan. 20, saying it would mark a milestone in VW’s efforts to overcome its biggest-ever corporate scandal.

“There is apprehension in the market that Trump may become an unpredictable president and turn against non-U.S. companies,” said Bankhaus Metzler analyst Juergen Pieper. “The deal is not cheap but it gives clarity to investors and relief to VW.”

As part of a settlement, VW would agree to significant reforms and face oversight by an independent monitor, Reuters reported.

The deal with the Justice Department comes as the carmaker aims to rebuild its long-struggling business in the U.S., where the decline in VW brand sales last year accelerated to 8%.

Europe’s largest automaker is striving to revive its fortunes in the wake of the scandal by developing a new modular platform for mass producing electric cars and by embracing automated driving to become a leader in green transport by 2025.

VW admitted in September 2015 to installing secret software in hundreds of thousands of U.S. diesel cars to cheat exhaust emissions tests and make them appear cleaner than they were on the road, and that as many as 11 million vehicles could have similar software installed worldwide.

It’s still not clear where criminal investigations into the responsibility of individual managers will end.

VW has repeatedly said no current or former board members were involved in the cheating and that it did not release information sooner because it expected to reach a negotiated settlement with U.S. regulators.

The company has agreed to spend up to $17.5 billion in the U.S. to resolve claims by U.S. regulators, owners and dealers and offered to buy back nearly 500,000 polluting vehicles.

VW would face major financial difficulties if the European Commission, governments and consumer groups were to succeed in pushing VW to grant redress to owners of affected diesel cars similar to that agreed in the U.S., said Pieper.

Meanwhile, some of VW’s top executives may find it risky to leave Germany as U.S. prosecutors prepare to charge more company officials.

Oliver Schmidt, a VW executive, was arrested in Miami as he was returning to Germany from vacation and faces charges of misleading regulators about the automaker’s diesel-emissions cheating devices. Prosecutors are preparing to charge more high-level German-based executives in the case, a person familiar with the matter said.

Schmidt’s arrest caught many VW executives by surprise, including some attending the Detroit auto show, according to another person. Lawyers for some senior executives in Germany have already warned their clients not to leave the country, according to a third person.

The arrest and the looming charges against senior executives show that the year-long investigation into the emissions cheating is coming to a head in the final days of the Obama administration. VW admitted last year that about 11 million diesel cars worldwide were outfitted with so-called defeat devices, embedded algorithms used to game emissions tests.

Schmidt, 48, who was VW’s liaison with U.S. environmental regulators, appeared in federal court recently, where a judge ordered him held in custody as a flight risk. His lawyer sought Schmidt’s release, saying his client had alerted the government he was visiting and was willing to speak with investigators and face charges.

The court filing against Schmidt lays out what could be a road map to charges against higher-level executives.

Volkswagen’s senior officials in Wolfsburg, Germany, were told in July 2015 of the existence, purpose and characteristics of the device that lowered emissions on diesel cars when undergoing environmental testing, the U.S. alleged, citing information obtained from three cooperators. VW admitted its efforts to skirt environmental standards in September 2015.

The government and Volkswagen have been trying to reach a settlement by Jan. 20 before the Trump administration comes into office and replaces the political appointees who have been overseeing the diesel-cheating case. VW also faces a criminal probe and lawsuits in Germany.

Any criminal penalty from the government would come on top of a $14.7 billion U.S. civil settlement between drivers, regulators and VW that requires the company to fix or buy back some models and pay to promote zero-emissions vehicles. In all, the company has already committed to spending almost $20 billion to settle complaints by car owners, dealerships and regulators in the U.S. and Canada.

VW has said top management was unaware of the decision to install the software to cheat emissions tests. “The then and current board of management of Volkswagen AG had, at any rate, no knowledge of the use of unlawful engine-management software at the time,” Volkswagen wrote in its annual report for 2015, a statement it has cited in response to subsequent inquiries.

VW has suspended or pushed out about a dozen executives in the aftermath of the scandal including former CEO Martin Winterkorn, who has denied any knowledge of the cheating.

“Volkswagen continues to cooperate with the Department of Justice as we work to resolve remaining matters in the United States,” the company said in a statement. “It would not be appropriate to comment on any ongoing investigations or to discuss personnel matters.”

The U.S. can charge individuals in Germany, but getting executives to stand trial in the U.S. could be difficult because Germany’s constitution bars extradition of German nationals to foreign countries other than European Union members.

Dozens of Volkswagen officials in Germany have hired U.S. criminal defense lawyers over the past several months as the Justice Department ramped up its investigation, Bloomberg reported last month. U.S. authorities have traveled to Germany to arrange interviews with managers and seek cooperation.