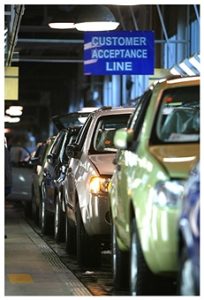 A bright spotlight is shining on SUVs thanks to record retail sales in 2016, yet three of every four car buyers didn’t even consider buying an SUV, according to the J.D. Power 2017 Auto Avoider Study.

Only 24% of car buyers considered buying an SUV in a year in which total retail sales of SUVs comprised 42% of the market. Only five years ago, SUVs made up just 34% of the market.

“Low fuel prices, favorable lease deals  the availability of low-interest loans are attracting buyers to SUVs, which historically are more expensive than most car models,” said Dave Sargent, vice president of global automotive at J.D. Power. “However, since consumers, on average, pay a 9% premium for an SUV compared with a comparably equipped sedan, many consumers still are not considering an SUV.”

Car buyers who rejected the SUVs they shopped at a dealer did so primarily due to a higher price and a desire for better gas mileage. Conversely, SUV buyers who shopped for cars rejected the cars because they were too small, lacked the desired cargo capacity and lacked 4WD/AWD capability.

Not only are SUVs typically more lucrative for auto manufacturers in terms of profit margins, but they are also proving to be a good way to entice buyers away from other brands. For example, the study indicates that SUV buyers are less brand loyal than car, pickup or minivan buyers. In fact, 38% of SUV buyers report never before owning the brand of their new SUV, a higher number than for car, pickup and minivan buyers.

Following are additional findings of the 2017 study:

* Reliability is a top purchase reason, increasing to 59% in 2017 from 55% last year. That’s the highest in six years and the third-most often stated purchase reason behind exterior styling (62%) and interior styling (61%). “Even though manufacturers are producing vehicles with the highest quality levels ever achieved, vehicle reliability continues to be a top concern among buyers,” Sargent said.

* For some brands, the perception of poor reliability continues to persist and lead many consumers to exclude them from further consideration. One example is Kia. The Korean brand is one of the most avoided non-premium import brands due to concerns about reliability, yet it earned the highest ranking among all brands in the recent J.D. Power 2016 Initial Quality Study (IQS).

* On the heels of last year’s Volkswagen diesel emission problems, this year’s study indicates a significant drop in consideration of the brand, slipping to 4.5% from 6.2% last year. Avoidance of Volkswagen due to reputation of the manufacturer increases to 20% in 2017 from 9% in 2016. Note that other brands have bounced back from blows to their reputation, and time will tell how long it takes Volkswagen to fully recover.