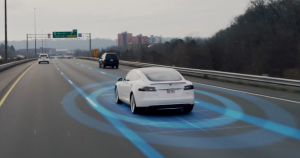 Tesla revealed Version 8 of its Autopilot software with plans to going live in one to two weeks. Version 8.0 includes updates to the signal processing tech used to interpret images received from the onboard radar. The update focuses primarily on the radar component of the Autopilot sensor system, turning it from a supplementary part of the overall tech, designed to complement the cameras, into a primary control sensor that, according to Elon Musk himself, should prevent accidents like the one that resulted in Josh Brown’s death.

“We’re making much more effective use of radar,” Musk explained on a press call regarding the updates. “We weren’t confident that we could resolve false positives where the radar would think that it should brake, but it shouldn’t.”

But after getting upgraded components from Tesla’s suppliers, they found they could combine that with their real-time fleet learning system and almost entirely eliminate false positives. That means radar alone can initiate a braking event, rather than requiring the camera component to also provide a positive image recognition result of a potential object.

Musk said that the new system should detect “anything that’s metallic, anything that’s large and dense,” and then brake the vehicle, “as long as it’s not large and fluffy.” If Autopilot is active, the system will be better able to predict the car’s path and then produce a gradual brake that Musk said should be “much more comfortable” and able to “brake entirely” in most cases, but even if Auto-steer is not engaged, it should also result in an emergency brake that will “mitigate” rather than completely avoid collisions in most cases.