Seven new Jeep concept vehicles, featuring an array of Mopar and Jeep Performance Parts available to consumers, will conquer the challenging trails of Moab, Utah, at Easter Jeep Safari, March 19–27. Thousands of off-road enthusiasts are expected to descend upon Moab this year, as the 50th annual event coincides with the 75th anniversary of the Jeep brand.

The 2016 crop of Easter Jeep Safari concept vehicles utilizes both production and prototype Jeep Performance Parts. The Mopar brand is responsible for developing, building and ensuring that all Jeep Performance Parts meet rigorous specifications and with 4×4 capabilities in mind, allowing Jeep owners to further enhance their stock vehicle.

“These seven vehicles have been modified with Mopar and Jeep Performance Parts to take on the toughest trails, to go beyond where the road ends,” said Pietro Gorlier, head of parts and service (Mopar), FCA – Global. “Mopar’s mission is to provide all FCA U.S. vehicle owners with unique performance parts and accessories to tailor vehicles to their individual lifestyles. Nothing supports that more than demonstrating how we can equip Jeep owners to take on some of the more extreme trails in the world.”

The seven new Jeep concept vehicles built for Moab this year were created by a team of engineers, designers and fabricators who have been customizing production vehicles since 2002, and have introduced more than 50 concept vehicles for the enthusiasts who attend the Easter Jeep Safari. 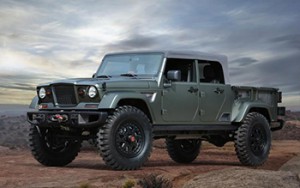 Steel front and rear bumpers, 20-in. beadlock wheels and 40-in. NDT military tires pay homage to the original Jeep military vehicles. The Crew Chief 715 utilizes an on-board air system with a hard-mounted quick-disconnect fitting for airing up or lending assistance to other vehicles on the trail. Other features include a master cylinder brake upgrade, cold-air intake and a modified exhaust.

The Jeep Crew Chief 715 is powered by the 3.6L Pentastar V6 engine and is mated to a five-speed automatic transmission. 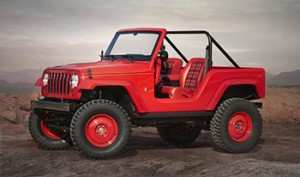 A carefully crafted take on the Jeep CJ-5, this Wrangler-based concept vehicle invokes the spirit of ’50s Americana with a shortened body and functional simplicity.

Jeep Performance Parts featured on the Shortcut include a front and rear Dana 44 axle and a 2-in. lift with Fox shocks. Overall body length has been reduced by 26 in., including bumpers and a spare tire to keep the Shortcut concept vehicle light and maneuverable on the trails.

The Jeep Shortcut is powered by the 3.6L Pentastar V6 engine and mated to a five-speed automatic transmission. 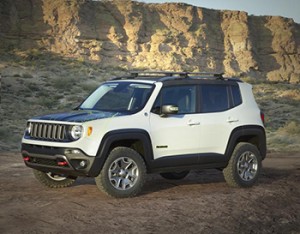 The Jeep Renegade Commander is powered by the 2.4L Tigershark engine with MultiAir2 mated to a nine-speed automatic transmission with Jeep Active Drive Low. 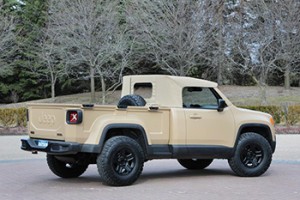 Based on the Jeep Renegade, the Jeep Comanche concept vehicle is designed to be off-road ready with practical utility. A nod to Jeep pickups of years past, the Comanche concept takes styling cues from military and civilian Jeep heritage.

The Comanche’s “Beige Against the Machine” concept exterior paint is accented with a satin black hood, a concept lower front fascia, winch, steel rear bumper, soft top and spare tire in the bed. The wheelbase has been stretched an additional 6 in. versus a production Renegade to accommodate Comanche’s 5-ft. bed.

Inside, the Comanche features custom seat covers, pedal covers, door sill guards and Mopar all-weather mats. Jeep Performance Parts, such as off-road rock rails, a 2-in. lift kit and a winch, bolster the Comanche’s off-road capability. The Comanche rolls on 16-in. painted wheels and 32-in. BFGoodrich All-Terrain T/A tires.

The Jeep Comanche is powered by a 2.0L diesel I-4 engine and mated to a nine-speed automatic transmission with Jeep Active Drive Lock, which includes low range and a locking rear differential. 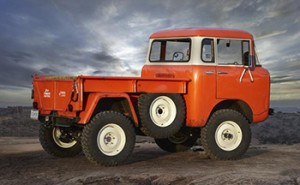 A true American workhorse, this ’60 Jeep FC 150 concept vehicle is rich with heritage and built to tackle both challenging rocky trails and the harshness of a western cattle ranch. Originally built from ’56–’65, the FC 150 is based on the CJ-5 and offers a clever packaging solution by keeping overall length to a minimum for maneuverability, but maintaining a full-length cargo box for utility.

This heritage Jeep vehicle continues to utilize its original steel body that bears battle scars while components underneath have been revamped. The FC 150’s off-road prowess has been enhanced courtesy of a ’05 Jeep Wrangler chassis modified to accept a Dana 44 front axle, Dana 60 rear axle and 17-in. white steel wheels wrapped in 33-in. BFGoodrich Mud-Terrain T/A KM2 tires.

The Jeep FC 150 heritage vehicle is powered by a 4.0L PowerTech I-6 and is mated to a three-speed automatic transmission. 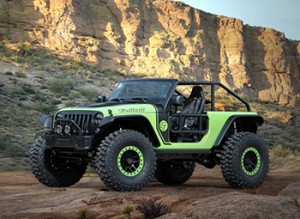 The Jeep Trailcat concept vehicle is the ultimate off-road machine, equally at home on Moab’s rugged trails or a high-speed section. The Trailcat concept utilizes the supercharged 6.2L HEMI Hellcat V8 engine and is mated to a six-speed manual transmission with a custom shifter ball featuring an embossed Hellcat logo.

To get the 707hp Hellcat engine into the Trailcat, designers stretched the wheelbase an additional 12 in. while chopping the windshield 2 in. for a sleeker look. Mopar exterior enhancements include a power-dome vented hood, Satin Black grille, LED headlamps and fog lamps and rock rails.

Subtle design cues, such as a Hellcat decal on the front quarter panels and a Trailcat decal on the side of the hood, hint at the horsepower that lurks beneath, making this much more than a typical production Wrangler. The Trailcat’s interior is simple, yet functional, and features sport bucket seats from the Dodge Viper, made from carbon fiber and featuring Katzkin leather seat covers with accent stitching. 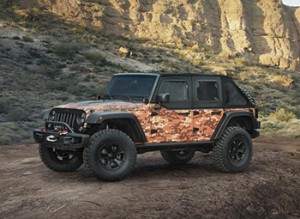 The Trailstorm concept vehicle is the ultimate Jeep Wrangler for exploring off the beaten path. Offering room for extra gear and fuel tanks, it is based on the Jeep Wrangler Unlimited and delivers elevated capability to conquer trails.

The Trailstorm’s bedlined interior also features Katzkin seat covers and Mopar all-weather floor mats. The Jeep Trailstorm is powered by a 3.6L Pentastar V6 engine and is mated to a five-speed automatic transmission.