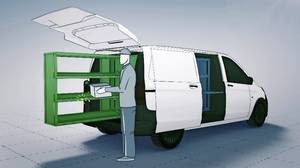 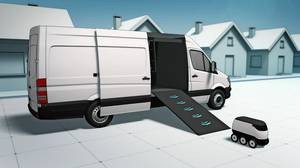 Mercedes-Benz is about to revolutionize the workaday world of the humble delivery van. With its so-called adVANce initiative, Mercedes-Benz Vans is preparing for a future shaped by megatrends such as urbanization, e-commerce and the Internet of Things.

The auto maker predicts that by 2020, 81% of all shopping will be done online. And those e-commerce shoppers will expect same-day delivery – or even within the hour, for groceries or restaurant meals. Mercedes wants to help future users of its vans to deliver those purchases with maximum speed and efficiency.

Hence, over the next five years Mercedes-Benz Vans (the company) will reinvent itself from a manufacturer of hardware (the vans) to a provider “of holistic system solutions for goods and passenger transport.”

Vans are big business for Mercedes-Benz – it sold a record 321,000 in 2015. The familiar full-size Sprinter and the recently launched smaller Metris are sold in Canada. A smaller van, essentially a rebadged Renault, hasn’t crossed the Atlantic.

A Vision Van concept revealed recently by Mercedes featured an electric powertrain, fully automated loading and unloading and integrated drones to perform the last stage of delivery to the customer’s front gate or doorstep. It is also digitally connected to all people and systems involved, from the distribution centre down to the end recipient.

Companies making the deliveries won’t necessarily own the vans they use. Mercedes is developing leasing and rental options and will extend its Car2Go sharing service to vans; theoretically, two or more unrelated customers could even share the same van on the same delivery route.

“Customers don’t like to own the assets because of upfront costs and downtime,” Mercedes-Benz Vans head, Volker Mornhinweg, says. “If we don’t do [sharing], somebody else will.”

Also in the plan: on-demand transit using passenger vans operated by Mercedes-Benz Vans in conjunction with a platform developed by U.S. start-up Via. Dispatchers would be available by phone, and the app could calculate, for example, whether fulfilling a new ride request could be a reasonable detour for the nearest vehicle.

Mercedes has partnered with many small start-ups because they have competencies in fields, such as drones, that large companies don’t. Combining the resources of Daimler with the flexibility and agility of start-ups, the partnerships emphasize diversity, youth, instant feedback and direct contact with customers.

One thing those contacts revealed is how disorganized many delivery companies are. Packages are loaded with little forethought and, at each drop-off point, time is wasted finding the right item. Said one presenter, “the inside of the vans screams for a good system.”

His team began by digitizing the interior of the van. Shelving is equipped with sensors that know where each package is. At the delivery point, the system tells the driver which door to open and a light on the tray identifies the package. After just eight weeks, the prototype system was “delivering” a 35% efficiency gain.

Remote GPS tracking of vehicles will not only allow routes and schedules to be planned for maximum efficiency, but also monitor the vehicles’ condition and schedule maintenance if needed; if a new order comes in while the vans are out on the road, the dispatcher can determine which van is best placed to return to base to pick up the order.

A more farfetched scenario involves automated slide-out shelving racks that can be preloaded and unloaded outside the van, and van-to-door final delivery done by up to eight robots or drones that ride along in the van. From a central parking-spot “hub,” the robots and drones can disperse to make multiple deliveries at the same time.