There is significant pent up demand on the horizon for Canada’s new and used car market according to Canadian Black Book.

The anticipation to buy is even higher among younger drivers – more than 6 in 10 Canadians aged 18 to 34 could be in the hunt, but almost 8 in 10 have never been through the trade-in process. 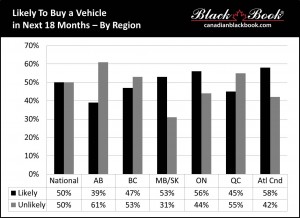 The same poll also shows Canadians feel under-informed about the potential value of their trade – a full 82 percent stating information on vehicle trade-in values is not readily available to them and mostly proprietary to dealers. 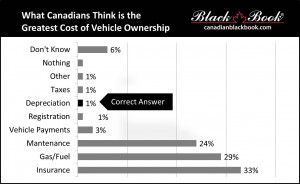 Canadian Black Book has themed its research, ‘Drivers of Automotive Values’ as part of its push to familiarize more sellers and buyers with the latest free web-based ‘Vehicle Value Calculators’ – online tools that provide trade-in values as well as future values and residual values are built to remove the guesswork for consumers.

Brian Murphy, Vice President Research and Editorial, Canadian Black Book, says, “The poll findings point to a perceived information gap, magnified by a decision-making process where most buyers seem to be making the wrong assumptions on the types of expenses that most impact the cost of owning a vehicle.” 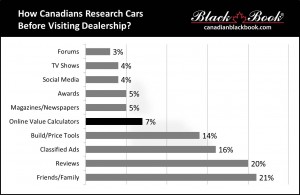 The CanadianBlackBook.com ‘Future Values Calculator’, which forecasts depreciation for cars, trucks and SUVs, up to four years ahead, is the best suited to help alleviate depreciation, by making known what models will hold the most value.

Web-based value tools are the number one choice for getting trade-in values.  Twenty percent of respondents acknowledge that they have discovered the benefits of Canadian Black Book’s free ‘Vehicle Value Calculators’. The use of online calculators as a source for vehicle values is more than double the number of people that rely on friends or family, and 6 times greater than social media as a resource for values.

Canadian Black Book provides a database of current and forecast future values on every mainstream make and model, at www.canadianblackbook.com.

Among the one half (51%) of Canadians that have traded in a car or truck to a dealership in the past, only half (48%) of those had a good idea of what their vehicle’s trade-in value would be, while over one third (36%) received less money than they expected.

“Awareness and usage has grown steadily since introducing our Vehicle Value, Future Value and Average Asking Price calculators for the public, but the poll shows many more Canadians still stand to benefit. We’d like to see these types of tools become a staple for every vehicle transaction.  They help people secure more for their trade or private sale, lower finance costs and to make informed decisions knowing expected rates of depreciation, which can vary widely from model to model,” says Murphy.