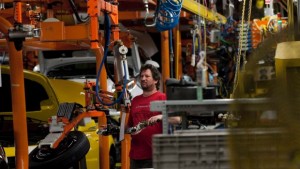 The framework for a tentative contract between General Motors and Canadian union Unifor could result in hundreds of millions of dollars in investments at GM factories in Ontario, including new product commitments, raises for employees and full-time status for temporary workers.

The deal, reached late Monday at the Sheraton Centre hotel in downtown Toronto, includes investments and product commitments at GM’s Oshawa, Ontario, assembly plant and new production volume at the St. Catharines, Ontario, engine and transmission plant. The investments fulfill a key goal of Unifor, particularly at Oshawa, where no vehicles were slated to be made beyond 2019.

Dias said ratification votes will take place on Sunday and that the union will sort out remaining details on the tentative deal in the coming hours.

In a statement, GM of Canada said the deal “will enable significant new product, technology and process advancements,” placing the automaker’s Canadian facilities “at the forefront of advanced manufacturing flexibility, innovation and environmental sustainability.”

“We will be working with the government on potential support, and will provide further details on the investment at the appropriate time, while respecting Unifor’s ratification process,” the GM statement said.

Negotiators for GM and Unifor reached a deal just minutes before midnight, with workers preparing to be in a strike position. Negotiations have largely centered around product commitments at Oshawa and St. Catharines.

The deal extends the life of the Oshawa plant, previously considered by Unifor to be the facility most at risk of closure. However, the plant’s beleaguered consolidated line, which builds the Chevrolet Equinox, will close.

Dias said the union was able to secure new product for Oshawa’s flex line. He said “hundreds of millions” of dollars in investments are committed to the plant under the deal and said it will be the only North American assembly plant with the ability to produce both cars and trucks. He did not say which products will be built there moving forward.

“The fear of a closure in 2019 is now over,” Dias said. “The facility clearly has a bright future.”

The pact also includes a boost in production volume at St. Catharines, which will receive engine production currently in Mexico. Dias did not say which engine it is.

“There’s been a straight migration of auto jobs from Canada to Mexico, and I’m so pleased [the union] has had success in reversing that trend,” Dias said.

The framework includes a wage increase for all employees, Dias said, indicating the union was able to change the pay progression to give its new members “much more money upfront.” It also includes a signing bonus and lump-sum payments.

“Workers at Toyota and Honda should understand that the path to full-time employment is through a union,” Dias said.

The framework also includes a new defined contribution pension plan for new employees, which Dias framed as one of the few negatives to be included in the deal. Dias said the defined benefit plan GM’s legacy workers are under would be preferable for new workers.

Dias said the deal’s wage and pension terms are “fair based on the economic times.”

Dias said the agreement is being called a “framework” because GM and Unifor still need to finalize some details.

“We need to go through [the deal] line by line, word by word,” Dias said. “There’s a couple things in there that have caused us some indigestion that we need to get through. But those issues will be resolved.”

The framework comes after roughly two weeks of intense negotiations between Unifor and GM. Dias had signaled that the union would go on strike if a tentative deal failed to include investments and product commitments at key GM plants.

“We ended up reaching a tentative agreement because of a clear understanding between the two parties that was the price of coffee,” Dias said. GM previously said it would not discuss product commitments until after a contract is ratified.

The tentative deal, should it be ratified, will set the pattern for upcoming negotiations with Ford Motor Co. and Fiat Chrysler Automobiles.

As with GM, securing product commitments at key Ford and FCA plants will be the union’s top priority in negotiations with the automakers. Dias has signaled the union will demand investments at two Ford engine plants in Windsor, Ontario, and at FCA’s Brampton, Ontario, assembly plant.

“This agreement, we tried to make sure would work well with all three,” Dias said. “I’m quite comfortable that our members will see it that way, as well.”