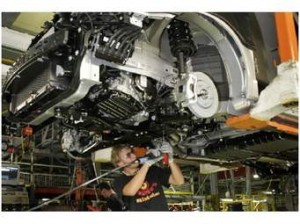 Negotiators for Unifor and Fiat Chrysler Automobiles NV reached a last-minute tentative agreement, averting a strike by about 10,000 auto workers that would have shut down the company’s two Canadian assembly plants and a factory that makes engine parts and other components.

After holding fast in negotiations for weeks against a so-called pattern agreement reached last month with General Motors Co., Fiat Chrysler agreed to a new contract that provides workers with $12,000 in bonuses spread over four years and wage increases of 2 percent in each of the first and fourth years of a new contract.

The deal between the Canadian union and the auto maker also calls for investment of $325-million to build a new paint shop at its plant in Brampton, Ont., a move that should secure its future.

“This has been one very difficult set of negotiations,” Unifor president Jerry Dias told a news conference late Monday night in Toronto.

A new pay scale gives them raises in the first three years of the new contract, an improvement from the previous contract, which held the hourly pay rate to $20.40 for the first three years of employment before workers progressed up a 10-year pay grid to the same hourly wages as traditional employees. The progression to the full rate of about $34 an hour begins immediately under the new deal.

About 3,300 work in Brampton and about 600 are employed at a plant in southwestern Toronto that makes cast engine parts and aluminum underbody components.

Cutting off parts from the Toronto casting plant would eventually have cascaded across the entire Fiat Chrysler vehicle manufacturing network in North America because those parts are assembled into engines that go into almost every North American-made vehicle the company sells.

Unifor was also seeking investment commitments from Fiat Chrysler that were similar to those made by GM, which promised to spend $550-million at an assembly plant in Oshawa, Ont., and an engine and transmission factory in St. Catharines, Ont.

Fiat Chrysler is the smallest of the Detroit Three when measured by total sales and production, but it has more employees in Canada and produces more vehicles in this country than either GM or Ford Motor Co.

The union’s key demand was for investment at the company’s assembly plant in Brampton, which cranks out the company’s flagship line of full-sized cars, the Chrysler 300 and Dodge Challenger and Charger sports cars.

Unifor is calling for a new paint shop at the plant to replace the oldest paint facility in the company’s North American assembly plants.

Unifor president Jerry Dias insisted even before talks began during the summer that the union would ask each company to commit to new investments in Canada. Once the GM agreement was signed, he said that new investment had become part of the pattern agreement and that any auto maker not promising new investment was also rejecting the pattern, a move that automatically triggers a strike.

If the Fiat Chrysler workers approve the new contract, Unifor will turn its attention to Ford Motor Co., to wrap up the 2016 talks.