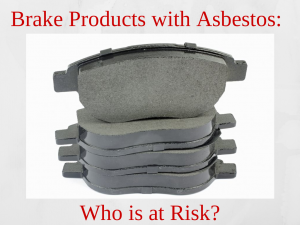 th risks that imported asbestos-containing brake components pose should prompt the Environmental Protection Agency to make asbestos one of the first 10 chemicals it evaluates under an updated toxic substances law, a vehicle parts organization says.

“The continued importation of asbestos-containing brakes and brake component material presents an unreasonable risk to the health of American workers,” the Motor & Equipment Manufacturers Association told the EPA in a Sept. 6 letter. The importation of these products also poses a risk to do-it-yourselfers who replace their own brakes, it said.

The association wants to encourage the use of safer alternatives throughout the market and level the playing field, Wilson said.

Asbestos-containing parts, which are cheaper than ones made without asbestos, still are being used by service stations, independent auto repair shops and other operations that provide after-market service, she said. Brake pads and linings use composite materials, making it difficult to determine exactly what they contain, the association’s letter said. Products are not required to be labeled as containing asbestos, it said.

The passage of the Frank R. Lautenberg Chemical Safety for the 21st Century Act (Pub. Law No. 114-182), which amended the Toxic Substances Control Act as of June 22, provides a way for the EPA to identify the risks of asbestos-containing materials and protect people from asbestos exposure, the Motor & Equipment Manufacturers Association’s letter said.

The Lautenberg Act requires the EPA by December to identify 10 high-priority chemicals for which it has undertaken risk evaluations.

The EPA should include asbestos as one of those 10 and evaluate the risks that brake friction materials pose, Wilson said.

As of January 2015, the phaseout of asbestos and other constituents in motor vehicle brake pads was completed due to California and Washington state laws, the letter said.

The state laws drove what became a de facto industry standard, the EPA said in a January 2015 memorandum of understanding designed to make the industrywide practice apply nationwide.

The Motor & Equipment Manufacturers Association was among eight industry groups that signed the memorandum, which was intended to protect watersheds and waterways from copper in particular, as well as from asbestos, cadmium, lead and mercury.

As industry groups worked with states to phase out the use of these hazardous compounds, it became apparent that asbestos-containing brakes and brake components were still entering the U.S., Wilson said.

In its letter to EPA, the Motor & Equipment Manufacturers Association backed up its concerns about imports with information it said the International Trade Administration provided Congress in 2015.

“Roughly $2.2 million in asbestos-containing brake friction materials and pads were imported into the United States in 2013 (most recent full year available),” the association said, providing Bloomberg BNA an e-mail exchange it had with the agency confirming the trade agency provided the information to Congress. An agency press officer did not reply to Bloomberg BNA’s Sept. 7 request for independent verification.

Wilson said the imported volume of asbestos-containing brake friction materials is small, but adds up because there are so many vehicles that need brake pads replaced.

The Motor & Equipment Manufacturers Association letter to EPA is available at http://src.bna.com/ilM.