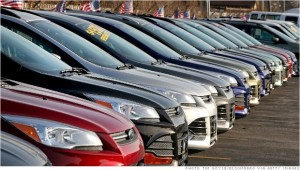 The pace of U.S. auto sales decelerated sharply in August, and deliveries fell 4.2% even as car companies ladled out sweeter incentives, the strongest signal yet the industry’s growth streak is losing steam.

August is typically among the hottest months for the auto industry during the year and analysts had anticipated a SAAR in the low-17 million range. Each of the biggest U.S. and Japanese auto makers posted declines except Fiat Chrysler Automobiles NV, due in part to a continued decline in demand for passenger cars.

To keep customers flocking to lots, auto makers are straining harder than they have in years to sell cars by dangling bigger incentives to shoppers. Spending on sales promotions and other discounts so far this year is at its highest level since 2009, according to research firm Kelley Blue Book.

“The market is still very, very strong by historical standards, but tougher and more difficult,” Ford Motor Co.U.S. sales chief Mark LaNeve said. Ford sold 213,411 light vehicles, an 8.8% decline compared with a year before, and said it doesn’t expect the industry to match last year’s record, and predicts a further decline in 2017.

General Motors Co. is more bullish even as its August sales dropped 5.2% to 256,429. GM chief economist Mustafa Mohatarem said in a statement that solid economic underpinnings point to a “sustainable high level of customer demand.”

The best deals can be had on bread-and-butter sedans, luxury cars and compact vehicles struggling to find takers amid a growing preference for sport utilities. Nissan Motor Co., for instance, reported a 6.9% decline to 124,638 vehicles even as its light-truck sales rose 19%. The decrease was attributable to a 25% slide in passenger cars, such as the Altima.

Judy Wheeler, Nissan’s head of U.S. sales, said the auto maker will prioritize production of smaller SUVs, such as the Rogue, and try to avoid deep discounts. “Some of the incentive wars on the car side have just gotten crazy,” she said.

Cheap interest rates, longer loan terms and an increase in leasing have helped keep vehicles affordable even as the average transaction price for a light vehicle in August rose 2.6% from a year earlier to $34,143, according to Kelley Blue Book. Even so, auto makers have needed to boost reliance on sales to daily rental operators to make up for waning demand among individual retail buyers.

Retail sales have fallen in four of the past six months, after rising for 66 straight months, according to research firm J.D. Power. Fleet sales to rental lots are generally seen as a far less profitable business than retail deliveries.

Ford’s decline, the steepest of the major auto makers, came partly because it pulled back on daily rental sales that propped up numbers for much of the year. Rentals accounted for just 4% of Ford’s total sales in August, compared with 13% for the year.

GM’s sales fell 5.2% to 256,429 despite an uncharacteristic increase in sales to rental lots. The No. 1 U.S. auto maker blamed its sales drop on short availability of some key models.

Fiat Chrysler Automobiles NV sales rose 3.1% to 196,756 on the strength of its Jeep brand.