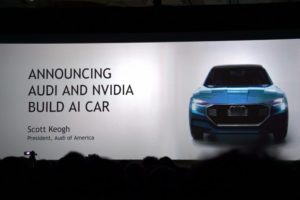 Audi and NVIDIA are long-time partners, merging the best of automotive engineering and visual computing technologies on Audi innovations such as Audi MMI navigation and the Audi virtual cockpit. Later this year Audi, will introduce the world’s first Level 3 automated vehicle equipped with a first-generation central driver assistance controller, or zFAS, that integrates NVIDIA computing hardware and software.

“Audi drivers know the pinnacle of performance and technology,’’ said Scott Keogh, president of Audi of America. “In our mutual pursuit for safer roads, the partnership between Audi and NVIDIA will expand to deep learning and artificial intelligence to bring higher automation into production more quickly.”

“NVIDIA is pioneering the use of deep learning AI to revolutionize transportation,” said Jen-Hsun Huang, Founder and CEO of NVIDIA. “Audi’s adoption of our DRIVE computing platform will accelerate the introduction of next-generation automated vehicles, moving us closer to a future of greater driving safety and new mobility services.”

Keogh and Huang announced their companies’ collaboration during the opening keynote of CES 2017. To showcase their progress, Audi and NVIDIA developed an Audi Q7 piloted driving concept vehicle, which uses neural networks and end-to-end deep learning on NVIDIA’s artificial intelligence platform to navigate a complex course. The vehicle learns from both the road and the driver in every mile it travels and can handle unpredictable situations like roadblocks, construction and changes in weather. This demonstration illustrates the power of end-to-end deep learning and how it will be one of many neural networks running simultaneously inside of an artificial intelligence car.

Demonstrations of the Audi Q7 piloted driving concept vehicle are available to media in the Gold Lot, adjacent to the North Hall of the Las Vegas Convention Center, throughout CES. The vehicle relies on its trained AI neural networks to recognize and understand its environment, then drive safely around the track without any computer programming. With no driver behind the wheel, it performs several laps on a closed course, where the configuration of the track will be modified in the middle of the demonstration. The course features a variety of road surfaces including areas with and without lane markings, dirt and grass, as well as a simulated construction zone with cones and dynamic detour indicators.

Audi will expand testing of highly automated, artificial intelligence-equipped vehicles on public roads in California and select states next year. As it has throughout its research of automated vehicle opportunities, Audi will maintain a spirit of transparency with state and federal regulators in the U.S. as it conduct its artificial intelligence testing and eventual vehicle system deployment to the public.

In parallel to delivering artificial intelligence solutions for complex urban driving, Audi brings to market this year the world’s first vehicle to meet the standards of Level 3 automation as defined by SAE International. The next generation Audi A8 will feature Traffic Jam Pilot, which uses a central driver assistance controller, or zFAS, with NVIDIA hardware and software. This system will give drivers the option to turn over steering, throttle, and braking functionality to the vehicle at speeds of up to 35 mph when certain conditions are met, aiding Audi drivers during their often stressful freeway commutes.

Audi has been at the forefront of automated driving since 2005 when its engineers with Stanford University won the DARPA Grand Challenge. In 2010 Audi and Stanford piloted a self-driving TTS up Pikes Peak with no human inside, completing the 12.42-mile mountain course in just 27 minutes. To kick-off CES 2015, Audi, accompanied by journalists, achieved a 566-mile test drive in an autonomous A7 named Jack, traveling from Palo Alto, California to Las Vegas with more than 500 of those miles hands-free at full highway speeds.