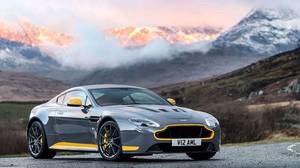 The British car maker is calling the V12 Vantage S with the stick shift the ultimate analogue Aston Martin.

The gears on the manual version don’t shift like most manuals though. Aston Martin has arranged them in a classic dogleg-shift pattern with first gear down and to the left with the rest following the ‘H’ pattern.

As an example of sports car makers going away from standard transmission, Porsche doesn’t even offer the GT3 RS as a manual because its PDK transmission means faster lap times. However, Porsche recently released the 911 R, a limited-edition car that only comes in standard.

But standard isn’t so standard any more. Only 3.6 per cent of new car buyers in Canada opted to shift their own gears in 2015. The percentage of cars that offer a manual transmission in Canada has fallen to 9 per cent from 35 per cent in 1980.

“Broadening the scope of the V12 Vantage S with a manual transmission option is an indication of our desire to offer the keenest drivers a more analogue and immersive machine to enjoy,” said Aston Martin CEO Andy Palmer in a statement.

The manual is offered as a no-cost option and is mechanically identical to the automatic version with a 6.0-litre, V-12 engine that pumps out 565 horsepower. Both cars sprint to 100 km/h from a standstill in 3.9 seconds and have a top speed of 330 km/h. Aston Martin has not announced when the car will be available for purchase.